Aungelique expected to have a surgery date to remove a mass in her stomach, but that hasn't happened because of promising news. The mass is shrinking.

ATLANTA - There are many ways a person could react to cancer.

It's been 6 months since Proctor's doctor broke the news she has stage 2 stomach cancer.

Underneath several bleeding ulcers, the scans showed a rare, and rather large, gastrointestinal stromal tumor, or GIST.

The cancer had not spread beyond her stomach.

Since then, Proctor has been fighting back, working with personal trainer Quentin Pullen, or "Coach Q" to his clients.

"I was already exercising, but I'm very deliberate about it," she says.  "I don't miss now."

Their goal is to get Proctor as physically strong as possible going into surgery to remove the tumor.

But, the workouts are just part of her plan.

"You name it, I've tried it. And it's working! That's the amazing thing." 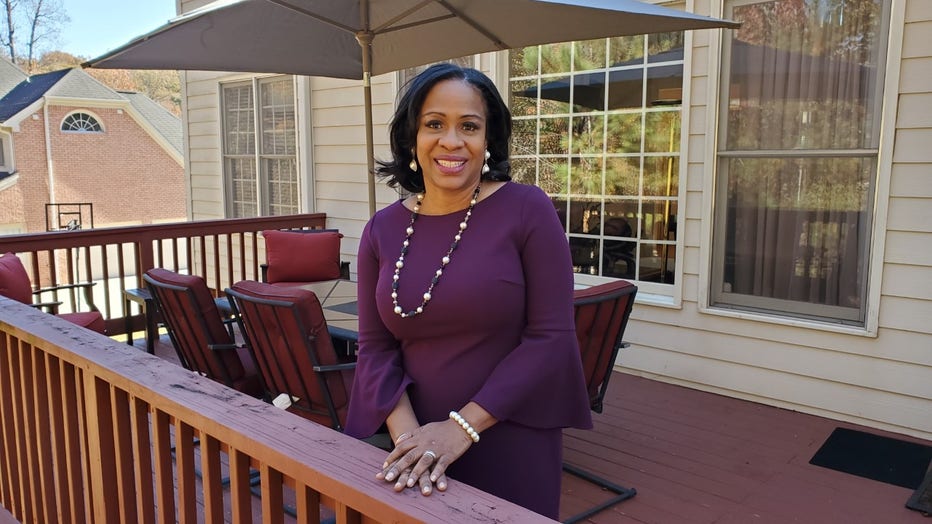 FOX 5 reporter Aungelique Proctor says her stomach tumor has shrunk from 13 centimeters to 5 centimeters since her diagnosis in October.

With help from chef Nora Pullen, Coach Q's wife, Proctor has changed the way she eats, focusing on a mostly plant-based diet, with produce Pullen grows in her Fayetteville garden.

Pullen sends her home with a week's worth of dishes for 3 meals a day, all of them healthy and ready to eat.

And, Proctor has tapped into her faith, which has long been a part of her life.

"I am so grateful to God for the ease that I'm dealing with this diagnosis," she says.  "I begin with prayer, and every day I wake up thanking God for my healing, and, when I go to bed, I thank him."

And there is much to be thankful for.

When Proctor first shared her diagnosis in a story on FOX5 that aired just before Thanksgiving, the tumor in her stomach was 13 centimeters, or just over 5 inches, long.

She had started taking Gleevec, a pill that is a targeted therapy, to try to shrink the mass as much as possible before she undergoes surgery to remove it.

"When you talked to me last time, I felt like we were going to beat this," she says.  "I know we're going to beat it now.  I mean, I am in such a better position that I was back then."

Because, by January, when she went in for another scan, the 13 cm tumor had shrunk to 6 centimeters, from just over 5 inches to just over 2 inches.

"Max and I were looking at each other like, this is unbelievable," she says. "We were blown away!"

And by early April, when Proctor and her husband Max went to meet her surgeon to set a date for her operation, the tumor was down to 5 centimeters.

"He said to us, 'The tumor is shrinking so well, we're not going to set a date; you're going to continue with the chemo pill, the Gleevec, until it won't shrink anymore," she says.

The news brought a flood of relief.

"There is going to be a lot of anxiety with the surgery," Proctor says.  "So, the fact we're putting it off, and continuing the pills, these chemo pills have been just a game changer, because I'm not having any side effects, I am just taking it with dinner, and it has been just seamless."

With their 3 daughters away at college, Proctor has kept working, although she has cut back from 5 days to 4 days a week, and her shifts, which often went long, are now a more normal 8 hours.

And telling her own story has helped her feel less alone, and more hopeful.

"Because there have just been so many prayers, and so much encouragement, and everything just seems to be going right," she says.  "I told you last time I hadn't cried (since my diagnosis), and I still haven't shed a tear.  But, once I'm cancer free, I think that's when the tears will flow.  Because it's going to be, 'Thank you, God. Yes. Thank you.'"