As Russia continues to invade Ukraine, there are reports Russian forces have seized control of the Chernobyl New Safe Confinement where international workers continue to clean up and contain the world's worst nuclear disaster. A 9-year, $2.3 billion international effort to contain the aging sarcophagus that surrounded the once exposed reactor core was completed just 3 years ago. International nuclear watch dog groups are concerned war in the region could once again cause radioactive material to become exposed.

FORT STEWART, Ga. - Nearly 4,000 soldiers stationed at Georgia's Fort Stewart will soon be deployed to Europe and Africa as a response to Russia's invasion of Ukraine.

RUSSIA-UKRAINE: WHAT TO KNOW AS RUSSIA ATTACKS UKRAINE

"Soldiers of 3rd Infantry Division regularly deploy to support combatant commands all over the world, assisting our allies and partners in a wide range of environments and missions. The Raider Brigade is trained and equipped to deter aggression and to reassure and defend our allies," said Col. Pete Moon, the 1st ABCT commander. 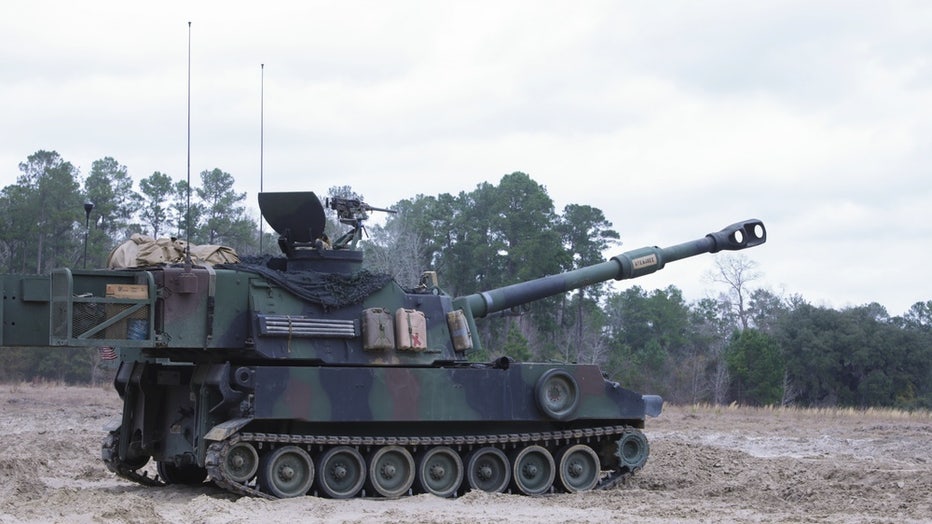 The deployment comes as Russia presses its invasion of Ukraine to the outskirts of the capital after unleashing airstrikes on cities and military bases and sending in troops and tanks from three sides.

Explosions sounded before dawn in Kyiv and gunfire was reported in several areas Friday, as Western leaders scheduled an emergency meeting and Ukraine’s president pleaded for international help to fend off an attack that could topple his democratically elected government, cause massive casualties and ripple out damage to the global economy.

Among the signs that the Ukrainian capital was increasingly threatened, the military said Friday that a group of Russian spies and saboteurs was seen in a district on the outskirts of Kyiv, and police told people not to exit a subway station in the city center because there was gunfire in the area. Elsewhere in the capital, soldiers established defensive positions at bridges, and armored vehicles rolled down the streets, while many residents stood uneasily in doorways of their apartment buildings.

Russian President Vladimar Putin has ordered the launch of a full-scale attack on the country of Ukraine.

U.S. Secretary of State Antony Blinken said Kyiv "could well be under siege" in what U.S. officials believe is a brazen attempt by Russian President Vladimir Putin to install his own regime.

The assault, anticipated for weeks by the U.S. and Western allies, amounts to the largest ground war in Europe since World War II. After repeatedly denying plans to invade, the autocratic Putin launched his attack on the country, which has increasingly tilted toward the democratic West and away from Moscow’s sway.

UKRAINE-RUSSIA CRISIS: COULD CYBERATTACKS IMPACT US?

The conflict shook global financial markets: Stocks plunged and oil prices soared amid concerns that heating bills and food prices would skyrocket. Condemnation came not only from the U.S. and Europe, but from South Korea, Australia and beyond — and many governments readied new sanctions. Even friendly leaders like Hungary’s Viktor Orban sought to distance themselves from Putin.

U.S. President Joe Biden announced new sanctions that will target Russian banks, oligarchs, state-controlled companies and high-tech sectors, saying Putin "chose this war" and had exhibited a "sinister" view of the world in which nations take what they want by force. He added that the measures were designed not to disrupt global energy markets. Russian oil and natural gas exports are vital energy sources for Europe.

Biden was to meet Friday morning with fellow leaders of NATO governments in what the White House described as an "extraordinary virtual summit" to discuss Ukraine.

British Prime Minister Boris Johnson said he aimed to cut off Russia from the U.K.’s financial markets as he announced sanctions, freezing the assets of all large Russian banks and planning to bar Russian companies and the Kremlin from raising money on British markets.

"Now we see him for what he is — a bloodstained aggressor who believes in imperial conquest," Johnson said of Putin.

Ukrainian President Volodymyr Zelenskyy urged the U.S. and West to go further and cut the Russians from the SWIFT system, a key financial network that connects thousands of banks around the world. The White House has been reluctant to do that, worried it could cause enormous economic problems in Europe and elsewhere in the West.

While some nervous Europeans speculated about a possible new world war, the U.S. and its NATO partners have shown no indication they would send troops into Ukraine, fearing a larger conflict. NATO reinforced its members in Eastern Europe as a precaution, and Biden said the U.S. was deploying additional forces to Germany to bolster NATO.