Law enforcement says no gun was spotted and students and staff are safe. Woodland High School and two nearby schools were placed on lockdown as a precaution.

HENRY COUNTY, Ga. - A spokesperson for Henry County Schools says three schools that were on lockdown after a report of a student with a weapon have been dismissed.

JD Hardin, communications director for Henry County Schools, said Woodland High School in Stockbridge was on a "hard lockdown" as law enforcement investigate the possibility of a student with a weapon on campus. Nearby Woodland Middle School and Woodland Elementary School are on "soft lockdowns" as a precaution, Hardin said.

The Henry County Sheriff's Office said no one has been harmed or threatened, but schools remain on lockdown as a precaution. 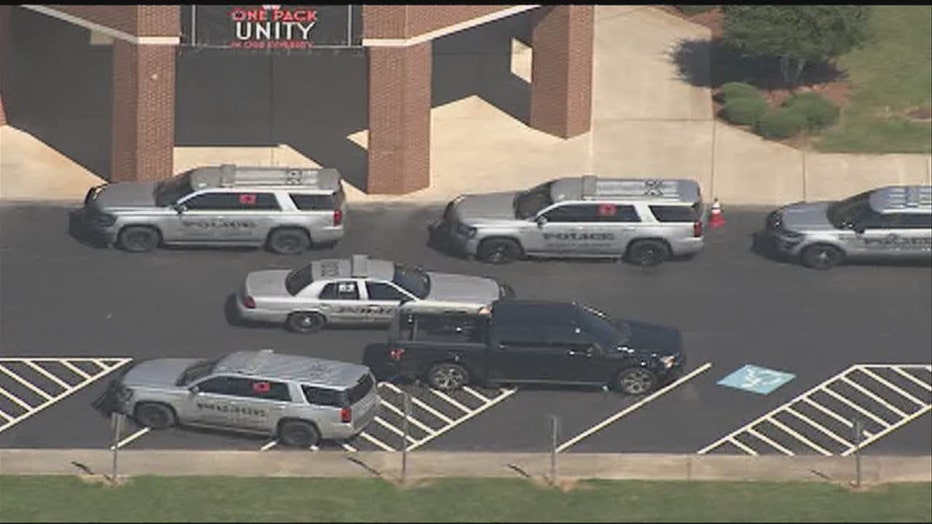 Police in Henry County investigate the report of a student with a weapon on campus at Woodland High School.

"HCSO responded after several reports started circulating." Sheriff Reginald B. Scandrett said in a statement. "Currently, no one with a gun has been found or spotted inside or outside of Woodland High School. Students and staff are safe, at this time."

Investigators said a photo of someone holding a gun in a restroom was airdropped to several people. Investigators conducted a thorough search of the premises and used K-9, which "hit on articles of suspicion."

"It is imperative to keep all students and staff safe," Scandrett said. "The investigation has gone without incident, but as a precautionary measure Woodland High, Middle and Elementary Schools were placed on lockdown. That lockdown has been lifted with the exception of a slow, methodical and systematic release, in respect to Woodland High School, the initial area of concern. HCSO responded after several reports started circulating. Currently, no one with a gun has been found or spotted inside or outside of Woodland High School. No one has been harmed or threatened. Students and staff are safe, at this time. "

Parents are being instructed to go to the Stockbridge Amphitheater Parking Lot for inquiries. Captain Newton, Officer Kennedy and Deputy Love will be on-site answering questions.