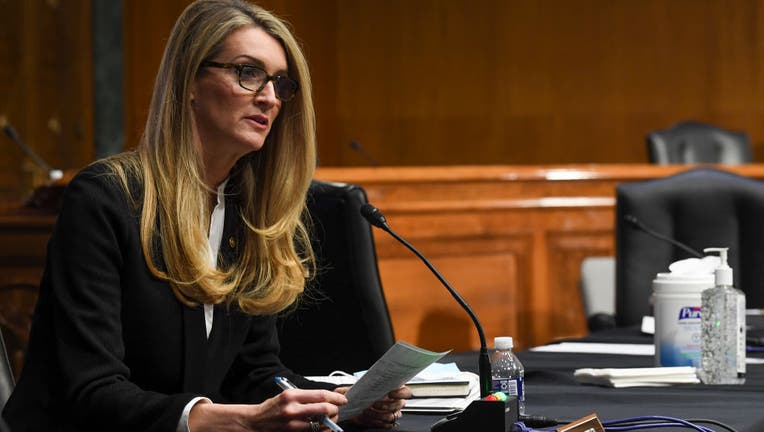 ATLANTA - Georgia Sen. Kelly Loeffler says she is co-sponsoring a Senate resolution that would call for the group Antifa to be designated as a domestic terrorist organization.

The resolution, introduced by Sens. Bill Cassidy of Louisiana and Ted Cruz of Texas in 2019, would call for groups who identify as Antifa be designated as domestic terrorists as well as call upon the federal government to "redouble its efforts to combat the spread of domestic terrorism in all forms."

“In the wake of George Floyd’s tragic death, Americans, including myself, are angry and each of us has a right to protest peacefully,” Loeffler said in a statement. “But the violence, destruction and anarchy brought to cities across America by mobs incited by Antifa are not principled protests and are detracting from the peaceful protests."

Loeffler said that Antifa activists "often ignite tensions, commit acts of violence, instill fear, and spread chaos," saying that their activity is a distraction from those working to honor the memory of George Floyd.

MORE: Rising tensions between demonstrators and police after 3 nights of protests in Atlanta

The Georgia senator's comments come a day after President Donald Trump tweeted that the U.S. will designate Antifa as a “terrorist organization.”

Trump had previously alleged that the violence coming after peaceful protests across the country was “being led by Antifa and other radical groups.”

Attorney General William Barr has seemed to echo Trump's assertion, alleging that the violent incidents in Minneapolis were driven by groups using "Antifa-like tactics," and vowing that federal prosecutors across the country would use federal riots statutes to charge protesters who cross state lines to participate in violent rioting.

An antifa activist group disseminated a message in a Telegram channel on Saturday that encouraged people to consider Minnesota National Guard troops “easy targets,” two Defense Department officials said. The message encouraged activists to steal “kit,” meaning the weapons and body armor used by the soldiers. The officials were not authorized to discuss the matter publicly and spoke on condition of anonymity.

PHOTOS: Protesters gather in Atlanta for 3rd night of demonstrations

Others have seen evidence of right-wing extremists. J.J. MacNab, a fellow at George Washington University’s Program on Extremism, has been monitoring chatter about the protests among anti-government extremists on social media platforms. She has access to dozens of private Facebook groups for followers of the loosely organized “Boogaloo” movement, which uses an ’80s movie sequel as a code word for a second civil war.

She also has been poring over images from the weekend protests and spotted some “boogaloo bois” in the crowds, carrying high-powered rifles and wearing tactical gear.

“They want to co-opt them in order to start their war. They see themselves as being on the side of protesters and that the protesters themselves are useful in causing anarchy,” MacNab said.

She also sees signs that the Three Percenters militia movement appears to be taking an interest.

Loeffler said in her statement that she commended Trump and Barr for  "taking action to hold Antifa accountable and determine who is organizing these destructive protests."