TREASURE ISLAND, Fla. - This weekend marks the start of sea turtle nesting season along the beaches in the Sunshine State.

Thanks to new lights being installed in Treasure Island, hatchlings should have an easier time finding their way around the beach in Pinellas County.

After hatching from their nests on the beach, sea turtles rely on moonlight to find their way to the water. Bright lights from beachside businesses, housing, and the street can disorient the baby turtles, causing them to crawl the wrong way.

It is estimated artificial lights are responsible for thousands of turtle deaths each year.

Caitlin Mackey was at the Clearwater Basin Marina when she spotted three dolphins swimming next to the sea wall, including an extremely rare, all-white calf.

"The State of Florida is one of only two places in the world that is home to loggerhead sea turtles, and only one in about 1,000 sea turtles make it to adulthood," said Treasure Island assistant public works director Stacy Boyles. "So it’s really important that we all do our part, and do what we can to help them survive."

That is the reason Treasure Island has been working over the last four years to install sea turtle-friendly streetlights along Gulf Boulevard. 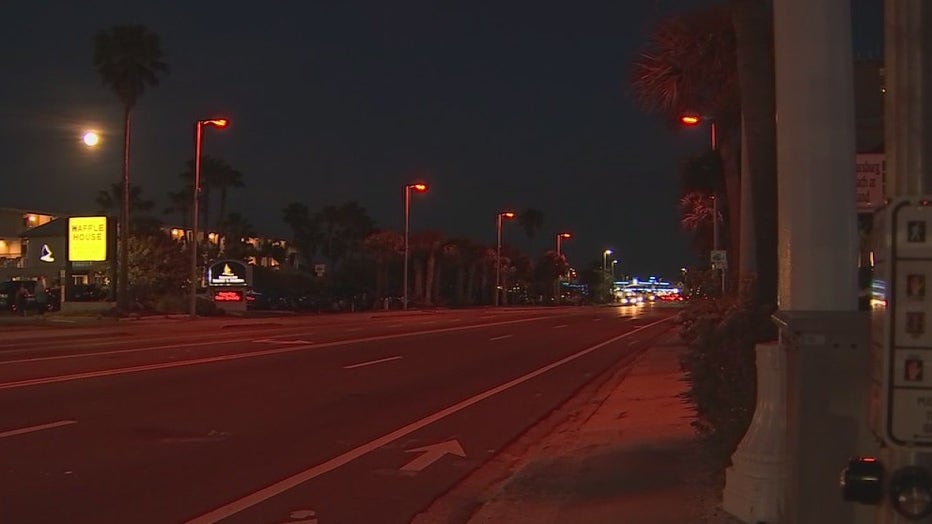 The city needed FDOT approval to swap out those bright lights since Gulf Boulevard is a state roadway. Thanks to this request, FDOT updated its design manual to include wildlife standards for sea turtles, meaning turtle-friendly lights can now be installed along any coastal highway in Florida.

"We have eight trial street lights that have been installed here at 112th Avenue and Gulf Boulevard," said Boyles.

Those eight poles have been retrofitted with new fixtures. The biggest difference you will notice is the color.

The National Oceanic and Atmospheric Administration is testing a new generation of hurricane-hunting, remote-controlled aircraft.

"Instead of having that bright white glow, you’re gonna have that darker amber color to the roadway," Boyles said.

Shields near the bulbs block the light even more, making it less visible from the beach, and giving hatchlings a greater chance of survival.

Nesting season in Florida runs from May through October. All of the sea turtles in the Sunshine State are either threatened or endangered.

Treasure Island has adopted progressive lighting standards and ordinances to help protect the turtles. The city is passionate about taking the time to educate our residents, businesses, and visitors about the impact of lighting.

"We are able to have daily fines that we issue," explained Boyles. "When you’re here staying on the beach please remember to turn off your lights when you’re not in a room, close your shades at night, and don’t use lighting out on the beach. Also, help your kids remember to fill in their holes, and knock down their sandcastles, and take all their trash and items with them when they leave every day."

FWC will be out to inspect the eight lights next week. If approved, the amber fixtures will be installed countywide along Gulf Boulevard.