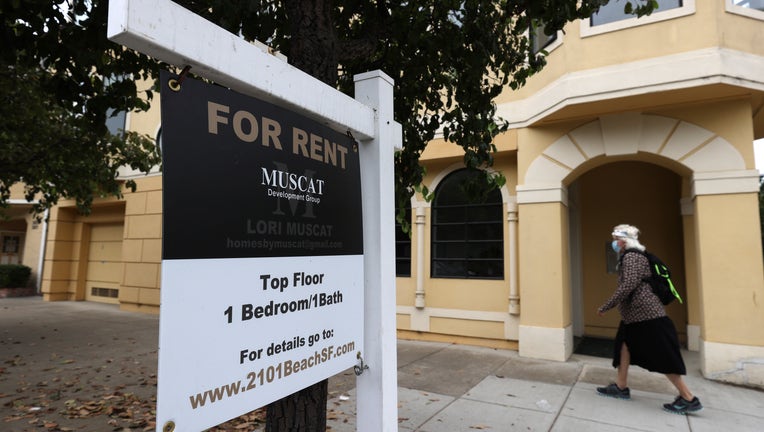 A pedestrian walks by a building advertising an apartment for rent on September 01, 2020 in San Francisco, California.(Photo by Justin Sullivan/Getty Images)

SAN FRANCISCO - New data following 10 months of the coronavirus pandemic shows rents continuing to fall in tech hubs around the nation, and San Francisco is still leading the way.

Remote work and high cost of living are a few of the mentions for why an astronomically expensive city is becoming more reasonable, according to a November rent report by realtor.com. It compared current rent prices to rates from the same time last year and found the median rent for a studio apartment in San Francisco has dropped 35 percent to $2,100 a month. For a one-bedroom, the median price is down 27 percent to $2,700.

Neighboring high-cost cities rank among the biggest sticker shocks. In Santa Clara, rents are 20 percent cheaper for studio apartments compared to last year. The city made the top five for biggest rent drops for studio, one-bedroom and two-bedroom apartments -- the three types involved in the report. San Mateo saw some of the country’s sharpest drops, too, with one-bedrooms plunging nearly 18 percent.

But Bay Area cities are certainly not alone. One-bedroom rents declined year-over-year in 36 of the 100 largest counties, up from just 6 in March when stay-at-home orders first began in response to the virus.

Already a number of tech companies have said bye to California since the coronavirus spread throughout Golden State. Paying the state’s high taxes and cost of living may seem silly when you have an empty office. Hewlett Packard Enterprises, one of Silicon Valley’s founding tech companies, announced earlier this month they’re moving their San Jose headquarters to Texas.

Also in Texas now is Tesla CEO Elon Musk, who took aim at California when announcing his departure on Tuesday. The electric automaker said the move makes sense as plans continue for a new factory in the Austin area.

It's a name synonymous with Silicon Valley, but Hewlett Packard Enterprises is moving to Texas.

For cities like San Francisco, the study suggests people are seeking more affordable living, different job opportunities, or simply a less crowded space. Now that folks have the flexibility of working from home, dishing out a lot of money to live in an exciting city can lose its appeal.

But that’s exactly where another door may open. Because on the flip side, if you’ve desired to live in San Francisco and the cost was a barrier, now may be your chance to go for it. Coronavirus vaccine distribution could start next week in the Bay Area and hope for normalcy is on the still-distant horizon.