Atlanta police and loved ones are searching for a missing woman.

ATLANTA - Atlanta police and loved ones are searching for a woman who has been missing since November 6.

Sean Macklin's ex-boyfriend, Bernard Stokes, told FOX 5 the two were in the process of breaking up.

Stokes had filed a temporary protective order against Macklin on October 28. He also said Macklin was supposed to move out on November 7. He said he offered her financial help to find a new place to live.

Stokes said he last saw Sean Macklin as she left their shared apartment in southeast Atlanta on Friday, November 6.

He said he tried to ask her where she was going at 3:45 in the morning, but he didn't get an answer.

"She was inconclusive about it, so I just left it where it was," Stokes said. 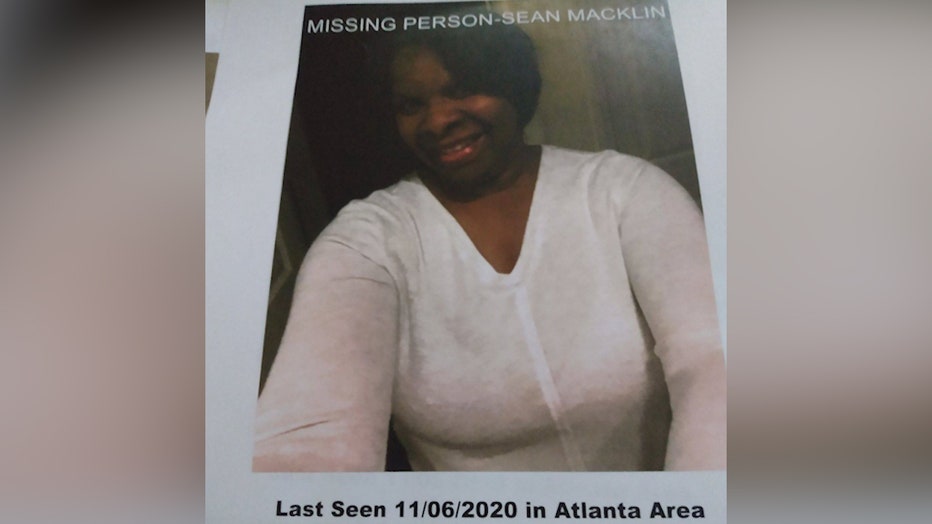 He said he sent her texts on Friday and Saturday but never heard from her. Stokes said he also noticed her car was still in the parking lot.

Saturday came and went, and she never showed up to get her things.

"When Sunday came, I decided to call the police. It was about 9 in the morning. Then, Officer Greene responded and I showed him her car," Stokes said.

He said he was told to call back on Monday after checking to see whether or not she showed up for work.

Stokes said he called the hospital in LaGrange where she worked but was not able to get that information.

Then, according to a police report, Macklin's daughter also called to report her missing.

Since then, Atlanta police have executed several search warrants at the apartment.

Stokes said he firmly believes Macklin will be found. He said he's currently doing everything he can to make sure she's found safe.

He has been putting up flyers in the Atlanta, Newnan, Riverdale, and LaGrange areas, desperate to find any information.

"God knows I don't want anything to happen to her. I am out two hours a day, every night putting up flyers to find her," he said. "Somebody has to care. Somebody knows where she is."

Macklin was last seen leaving the house in grey or navy scrubs. She had an orthopedic boot on her left foot and a red coat.

Anyone with information on her whereabouts or about her disappearance is asked to call the Atlanta Police Department.