One suspect was injured, one on the run, and at least two are in custody following an incident where officers said they were forced to open fire on an armed suspect in the Old Fourth Ward on Memorial Day.

ATLANTA - The Georgia Bureau of Investigation has been asked to investigate a shooting involving an Atlanta Police Department officer Monday.

It happened in the area of Jackson Street and Highland Avenue in the Old Fourth Ward neighborhood. Atlanta police said officers were responding to the area after a report of shots being fired. Police said they found four people in a white Jeep, one who was armed.

It was a semi-automatic weapon,” said Atlanta Police Sgt. John Chafee. “That’s when police began firing shots, shooting him in the arm.”

Investigators said they are still gathering details that lead to the officer opening fire.

FOX 5 spoke to a witness who was going on a walk when he heard and saw it all unfold.

“They had guns drawn. They were going behind the bushes,” said Qadir.

Investigators conducted a manhunt for several hours Monday evening, shutting down the areas near Jackson Street and Highland Avenue. Officers ended up searching a wooded area near the scene for the remaining suspects. Three suspects, identified as 30-year-old Reginald Carter, 29-year-old Demonte Thomas, and 24-year-old Artez Carter, were taken into custody after investigators say an Atlanta police officer shot Carter in the arm.

One suspect is still on the run and has not been identified, GBI officials said Tuesday. 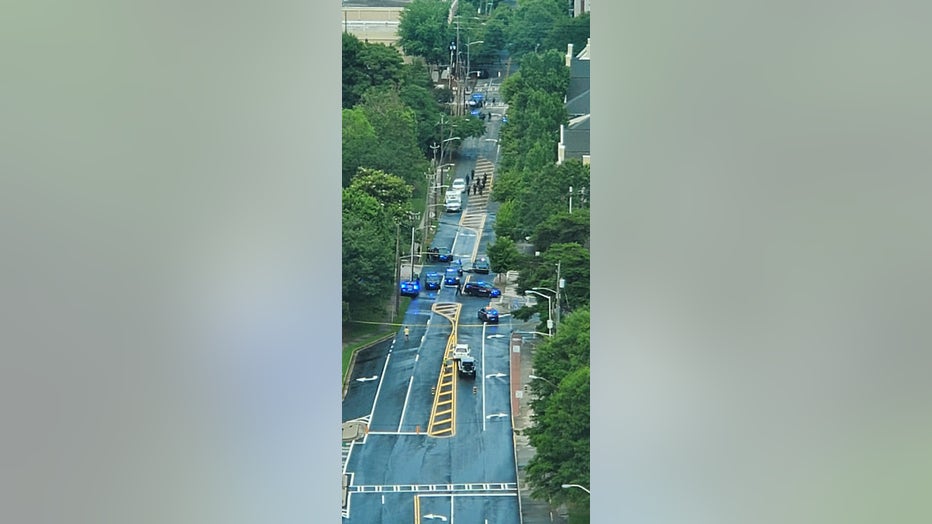 This photo provided to FOX 5 by Pia Bhatti shows the aftermath of a shooting in the Old Fourth Ward of Atlanta on May 25, 2020. (Pia Bhatti)

No one else was injured. The circumstances surrounding the shooting are still unclear. Three of the four suspects were immediately taken into custody, but investigators spent several hours searching for the one who took off.