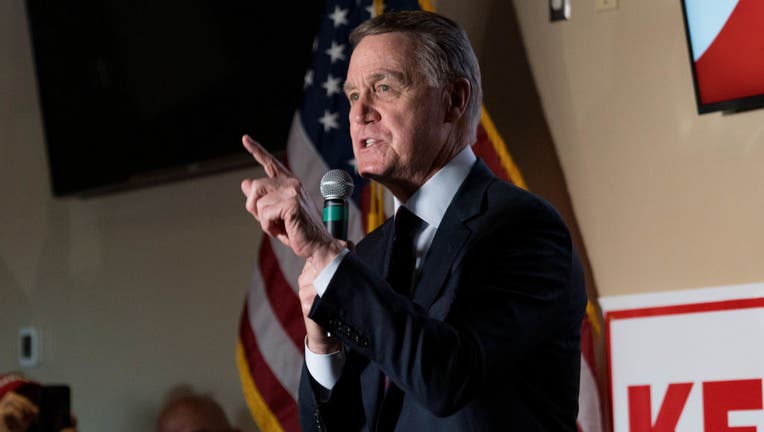 ATLANTA - Republican Sen. David Perdue is declining to participate in debates against Democratic challenger Jon Ossoff ahead of their Jan. 5 runoff in Georgia.

Ossoff’s campaign said Monday that Ossoff has accepted six invitations from various media organizations for debates between now and Jan. 5. But Perdue has said no to a Dec. 6 debate hosted by the Atlanta Press Club, and his reelection campaign made it clear that he doesn’t plan on debating Ossoff again.

“We’ve already had two debates in this election,” Perdue campaign manager Ben Fry said in a statement, referring to debates held before the Nov. 3 election, in which Perdue came short of the majority needed to avoid a runoff. “We’re going to take our message about what’s at stake if Democrats have total control of Congress directly to the people,” Fry added.

The race between Perdue and Ossoff is one of two runoffs in Georgia that could determine control of the U.S. Senate. Republican Sen. Kelly Loeffler, who took office in January after being appointed by Georgia’s governor, faces Democrat Raphael Warnock in the other race.

A win by either Perdue or Loeffler would maintain the Senate majority for Republicans. Dual Democratic victories would yield a 50-50 split in the Senate, with Kamala Harris wielding the tie-breaking vote as vice president.

A spokeswoman for the Atlanta Press Club said Monday that Warnock has confirmed his participation in a separate Dec. 6 debate against Loeffler, while the group is still finalizing details with Loeffler’s campaign.

Meanwhile, Perdue will be represented by an empty podium at his race’s Atlanta Press Club debate that night.

“The Atlanta Press Club’s Loudermilk-Young Debate Series is disappointed that Sen. David Perdue has decided to not participate in his debate,” the organization said in a statement. “Jon Ossoff has confirmed his participation, so according to our rules, we will proceed with the debate and Sen. Perdue will be represented by an empty podium.”

Perdue also dropped out of his final debate against Ossoff ahead of the Nov. 3 election, instead attending a rally held by President Donald Trump, his close ally.