Georgia sheriff offers advice for those concerned about Thanksgiving

OCONEE COUNTY, Ga - Thanksgiving will be different for most of us in 2020. With a potential for large gatherings causing a spike in COVID-19 cases, some people canceled Thanksgiving, others don't know what to do.

For many, it's a scary and confusing time. In Oconee County, some people turned to their sheriff for guidance.

"COVID is a serious issue. but I don't think that running and screaming from Thanksgiving is an appropriate response," said Sheriff Scott Berry.

Sheriff Berry says his Thanksgiving won't be exactly like others in the past. Some of his out-of-town relatives won't make it for dinner because of COVID. He understands the concerns that people have and says a number of people called the Sheriff's Office with questions.

"I think people just want some guidance on what to do and they want to go by my advice for some reason," Berry said.

The sheriff posted his response on Facebook and it drew a lot of attention. 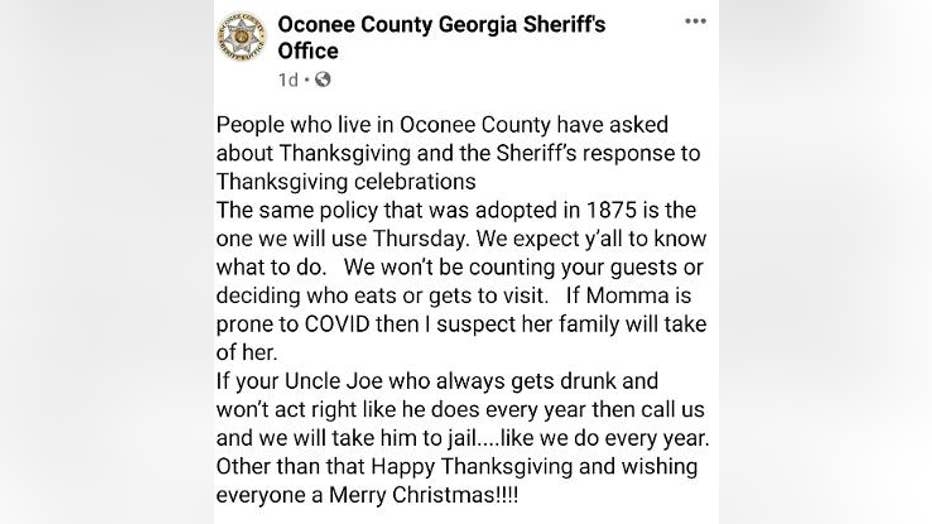 When it comes to following CDC guidelines and limiting the number of guests, the sheriff's post assured residents "We won't be counting your guests or deciding who eats or gets to visit".

Berry did say people need to be careful when it comes to family and friends with underlying conditions.

"Frankly, each circumstance stands on its own merits. People who are compromised and are older and have existing problems need to be careful, they do," Berry said.

He added that deputies will be on duty if anyone needs them.

"If your Uncle Joe who always gets drunk and won't act right like he does every year, then call us and we will take him to jail ... like we do every year," Berry wrote.

"There is likely that uncle or relative that can't control themselves, and we'll be there to answer those types of calls," he said.

But for the most part, the sheriff wrote "The same policy that was adopted in 1875 is the one we will use Thursday".

"Oconee County was founded in 1875 by an act of the legislature. I went back to the roots of Oconee County and posted on there we're going to have a Thanksgiving like everybody else's Thanksgiving," Berry said.

The sheriff added, "Go see momma and give her a hug and tell her, we at the Sheriff's Office love her."

As of Wednesday night, the Facebook post had hundreds of comments, some from people who don't even live in Georiga. It has been shared more than 11,000 times.