Police say an investigation of a spa at a Peachtree City strip mall led to the arrest of three women who are accused of offering sex acts in exchange for money. Officers say the three women, one who is 64 years old, face prostitution charges.

PEACHTREE CITY, Ga. - Three people have been arrested after police raided a Peachtree City spa on suspicions of prostitution.

Taken into custody following the raid were 52-year-old Furong Ren, 55-year-old Chaunhua Min, and the 63-year-old manager, Xiaoling Haung. Ren and Min was charged of sexual battery and prostitution and Haung was charged with keeping a place of prostitution.

The Peachtree City Police Department shared video showing the raid last Thursday at the PTC 74 Spa, which is located in a strip mall along Georgia Highway 74 North.

Police said they received a tip the establishment, located in the heart of a retail corridor that runs through town, was offering more than just massages.

"So, we got an anonymous tip that Highway 74, PTC massage was providing sexual favors for money or potentially that was going on there," said Peachtree City Police Lt. Brad Williams. 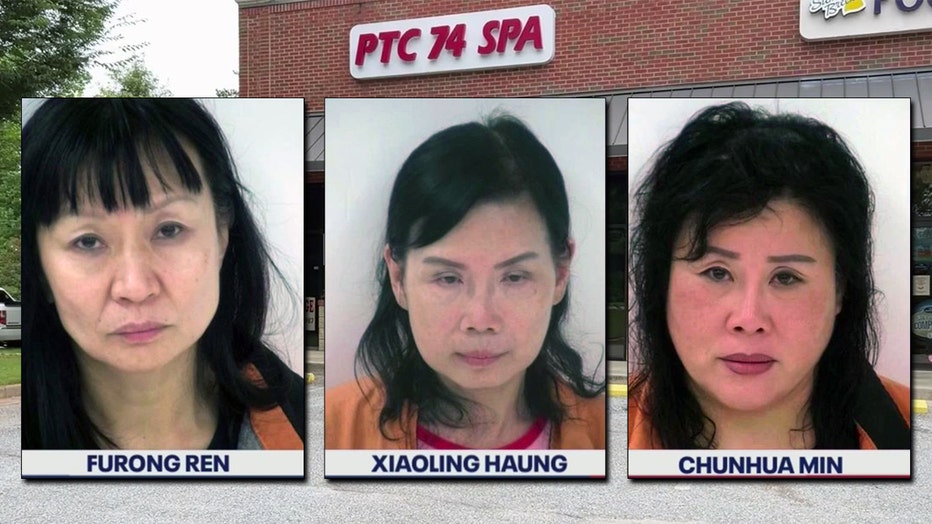 Furong Ren, Xiaoling Haung, and Chaunhua Min were arrested after a raid on the PTC 74 Spa in Peachtree City on July 28, 2022. (Fayette County Sheriff's Office)

Investigators said multiple undercover officers were sent into the business who found, each time, employees offered sex acts in exchange for money.

"At that point, we had enough to establish that it was the establishment and not just one massage therapist," said Lt. Williams.

Police said one of the women had been busted on similar charges in October 2018. That establishment has since closed.

The doors to PTC 74 Spa were shut on Tuesday when FOX 5 visited.