A Braves fan who lives in Australia is rooting for the team in the World Series despite a 16-hour time difference.

ATLANTA - Fans across the world are gearing up to cheer on the Atlanta Braves for Game 3 of the World Series at Truist Park Friday night including one super fan thousands of miles away in Australia.

She's loved the braves for 30 years and has a longtime dream of watching her favorite team play in the World Series in person.

Amy McCann said she’s been a Braves fan since 1991 when they played at Atlanta-Fulton County Stadium and she's devastated she can't cheer them on in Atlanta due to COVID-19.

She also credits FOX 5's Ron Gant, who played for the Braves for many years, for helping to create a lifelong fan down under.

The love of our Atlanta Braves runs deep for McCann. 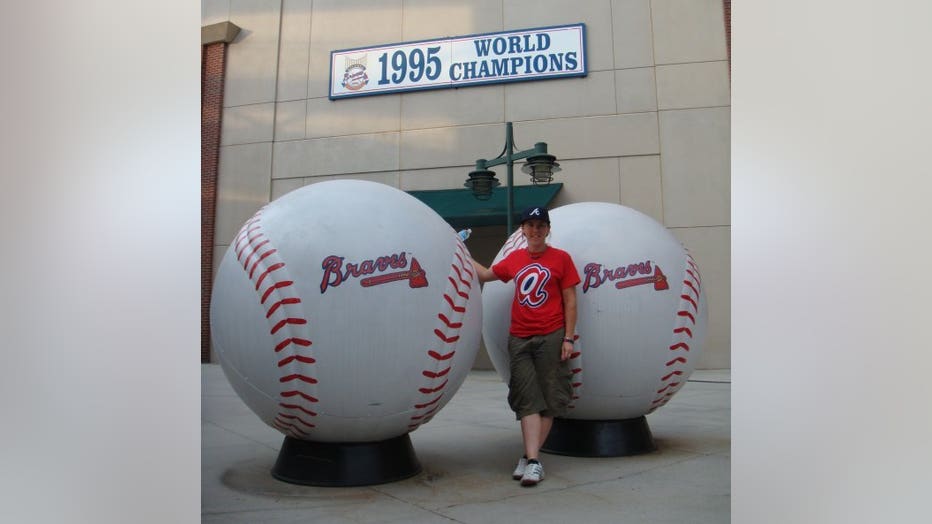 "Thirty years later, as you can see, they are still my team. They are 100 percent...My entire life goes into this team," she said.

Inside her home miles and miles away, she has turned her living room into a braves cave.

It's filled with jerseys, baseball hats, t-shirts, a picture of legendary Braves home run king Hank Aaron and baseball cads including some of Ron.

"I just love him. He was just so athletic and that smile and I just loved the way he ran the ball down in the outfield," McCann said.

One of her dreams has always been to meet Ron.

On Friday, just before game three in the World Series, she finally got the chance to speak with the Braves alumnus who played a major role in her sports journey.

"You're actually one of the reasons I'm a Braves fan! I used to watch you late at night.

Ron went on to say ‘It looks great in there. That is all braves stuff in there. I love it. Absolutely love it. "

McCann said she's followed every Braves season since she was 12-years-old.

Another lifelong dream has been to watch the World Series in person but because of COVID-19, Australia’s borders are closed.

"What's really sad is there they're opening up the borders on Monday, November 1st. I'm devastated but I'm keeping it in perspective."

During Games one and two, she wore this braves hat and shirt her father gave her in 1991.

Even though she's about 15 hours ahead in Australia, McCann said she'll be up to watch every World Series game and has a feeling the Braves will come out on top.