ATLANTA - The NCAA announcing Wednesday they are limiting all Division I Men and Women’s basketball tournaments to essential personnel and family.

The announcement comes just hours after the World Health Organization officially declared the coronavirus as a pandemic.

“The question is, is it overreaction or are they being safe?” said Steve Grimm of Atlanta.  “I know they are trying to limit everyone being together but wow.”

The Final Four might be headed to a downsized venue following the NCAA limited spectators at the tournament.

FOX 5 spoke to a ticket holder on the phone was planning to come from Boston.

“As a consumer, I would rather you cancel the whole thing because that says you are putting public safety first,” said Jake Duhaime.

This is the fourth time Atlanta has hosted; the last time was 2013. It’s considered one of the biggest events for the city, reportedly bringing in $70 million dollars last time and more than 100-thousand visitors.

“It’s normally very exciting for the city so I’m sad that it’s not going to happen,” said Darrell Neal of Atlanta.

SEE ALSO: NCAA games will be played without spectators amid coronavirus

It’s unclear what this now means for area businesses and restaurants.

“I am kind of worried about the economics of it because it does bring a lot of money to the city,” said Neal. 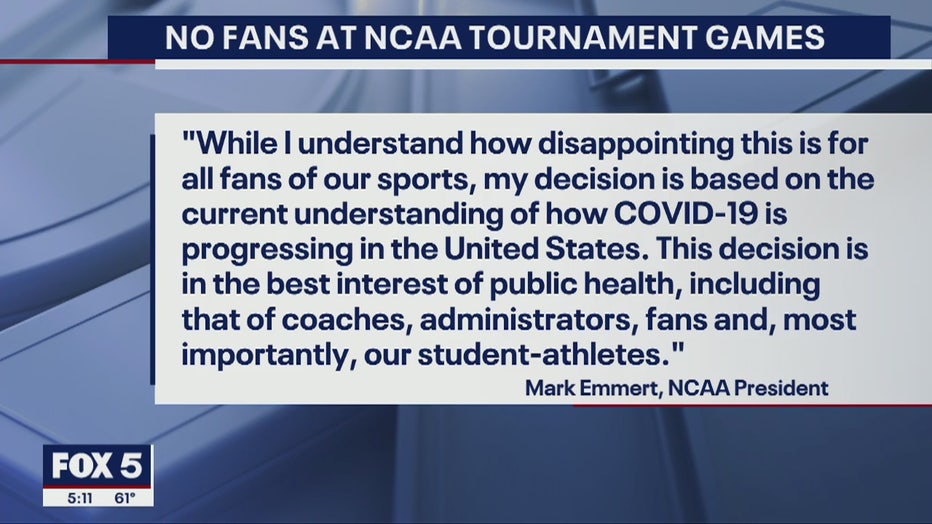 The NCAA joins a number of organizations heeding the warning of health officials who are telling people to avoid crowds and cancel large events.

And some fear this is just the beginning.

“I think we are facing an economic slowdown wherever we are,” said Grimm.

“While we are disappointed, we respect the decision of the NCAA and agree that public health and safety are our priority.

“I encourage Atlantans and visitors to keep in mind the hardships that our service and hospitality industries may face as a result of this decision, and to continue to patronize Atlanta businesses and tip a little extra to ease any burdens this may place on the families of those industries.”

The Associated Press reported Final Four organizers will be looking for an alternative venue. The current site was slated for Mercedes-Benz Stadium which can hold up to 80,000 people.

One of the venues which will likely be looked at is Georgia Tech's Alexander Memorial Coliseum where the remaining 2008 SEC quarterfinal games were played after a tornado damaged the Georgia Dome's roof during an overtime game between Mississippi State and Alabama. That venue holes up to 8,600 people.