A moving company is going above and beyond to help victims of domestic violence.

ATLANTA - With a decreased demand in services, one moving company is using its extra time to help people in need: Domestic violence victims.

And their aid comes at a critical time.

While Atlanta police reported a decrease in overall crime during the shelter-in-place, the department saw a nearly 60% increase in domestic violence cases in March and April compared to the year prior. In March of 2020, for instance, APD recorded 163 cases; that's up from 91 cases in March of 2019.

FOX 5's Emilie Ikeda spoke to one domestic violence survivor, who is not being identified for safety reasons, via phone. "[My partner and I] were actually told to be quarantined together," she said. "That definitely made the situation worse. It was like walking on egg hells; it was very scary."

The victim said because of coronavirus, she couldn't find anyone to help her move...until she learned about College H.U.N.K.S. through a local shelter's caseworker.

“We want to do what we can to support anyone living in a dangerous environment, especially during these unprecedented times," said co-founder and president Nick Friedman. "We’ve made our resources available to assist those who face circumstances of domestic violence and are looking for a safe way out.”

The heroic hands came at just the right time for this mother of two. "It's kind of like saving my life; they're like heroes right now."

East Atlanta franchise owner Daniel DeLasCasas demonstrated to FOX 5 the safety precautions the "hunks" are taking during moves -- including gloves, masks, and persistent sanitation of the trucks. Those trucks are also used to transport donated meals to food-insecure families.

"As a purpose-driven organization, we're always looking for ways to help the community, so what a perfect time now [to do so...], when people are really in panic mode and really need help," said DeLasCasas.

College H.U.N.K.S. has only helped move a handful of victims nationwide so far, including at least four in Georgia, but the need is undoubtedly there. 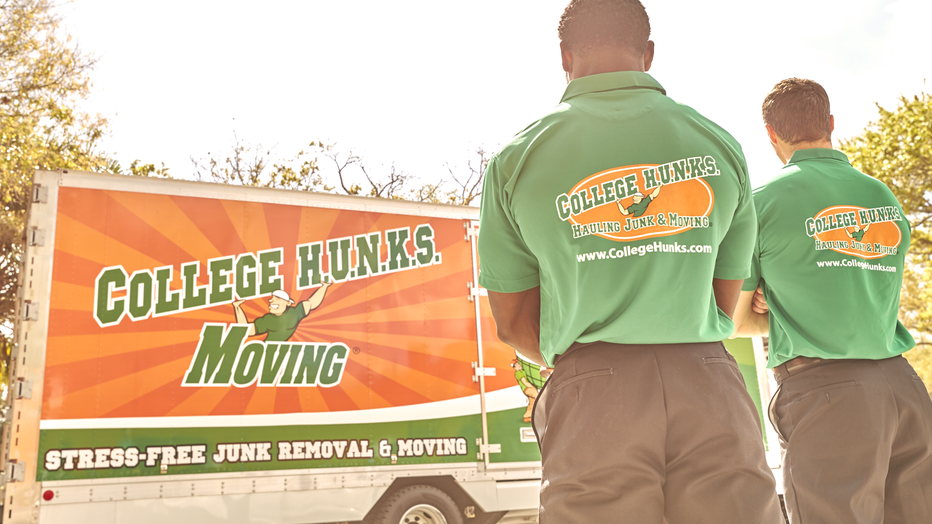 Nancy Friauf, president of local non-profit Partnership Against Domestic Violence, said in addition to the increase in cases, they've also observed an increase in the level of violence against survivors.

While states ease coronavirus-related restrictions, Friauf doesn't expect the data to taper off yet, citing continued stressors - that could result in continued violence.

"Folks are at home with their children," Friauf explained. "Children are anxious, they're acting out, [and] that puts more stress on the family. It may be that one or both of the adults in the household have lost employment or have reduced employment, so there are financial concerns. There are a lot of different factors that can lead to the escalation of the violence."

If you know someone who qualifies for College H.U.N.K.S.' free service, they're asked to first contact police and a shelter, such as the Women's Resource Center to End Domestic Violence, before reaching out to the company via email or phone.

The shelter then can contact College H.U.N.K.S. at nationalaccounts@chhj.com or 404-592-5219 to keep the victim's information confidential.