An ammonia leak forced an area around DeKalb Avenue to shelter in place for a time while crews worked to cap it.

ATLANTA - Firefighters said an old bakery that was being decommissioned to make way for new condos experienced a major ammonia gas leak.

The leak happened a the Schwan's building located at 1 Lemon Lane NE in the Edgewood neighborhood of Atlanta.

"In the process of removing the ammonia, one of the values broke causing the ammonia to leak," said Battalion Chief Gary Robb, Atlanta Fire Department.

Fire officials said no one was in immediate danger in the area that was placed under a shelter-in-place order around 2:30 p.m. Monday.

"The rain, the weather actually helped us," the fire battalion chief said. "We used the weather to our advantage."

Firefighters sprayed water over the leak to help keep the ammonia plume down until it was safe to enter the building again. 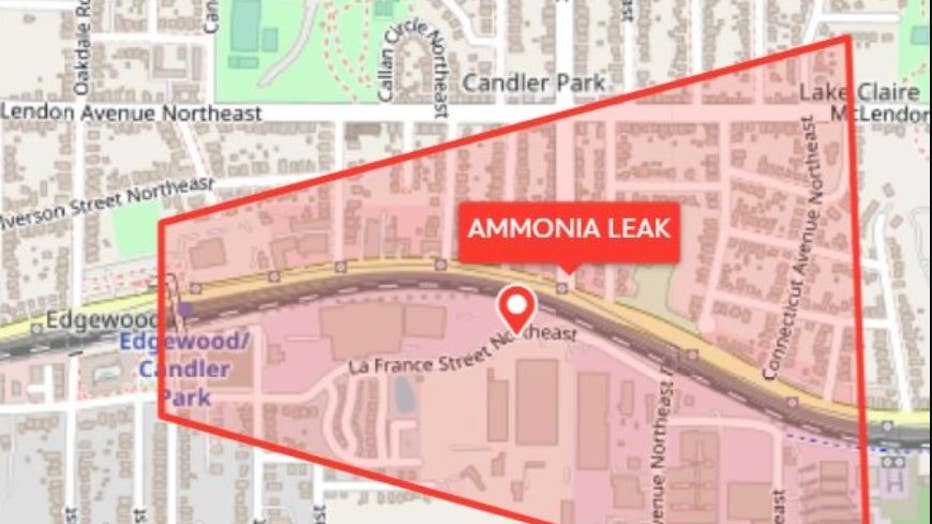 Officials said part of the decommissioning was to remove about 40,000 pounds of ammonia from the property. About 18,000 pounds were safely offloaded before a valve broke, causing a portion of the remaining 22,000 pounds to be spilled.

The chief did was not sure of the exact amount that was spilled.

"Ammonia is actually a gas. It's not a dangerous gas unless there is a lot," he said.

About seven or eight workers were at the scene but were able to safely evacuate and call 911.

Crews managed to resolve the leak around 4:30 p.m. No injuries were reported.

Several roads were shut down in the area, including DeKalb Avenue and Arizona Avenue. Traffic was also blocked at the intersection of Oakdale and DeKalb Avenue.

According to Atlanta-Fulton County Emergency Management, a Wireless Emergency Alert to Shelter in Place was sent to the immediate area of the ammonia leak. That order has since been lifted.

"If you are in the immediate area, you will smell it for a while because the ammonia is so strong, but the leak has been capped and they will be removing the rest of the ammonia out of there," the chief said.

Ammonia gas is used in refrigeration units and can also be used in water filtration. It contains nitrogen and hydrogen and is known for its pungent smell.  It can be a skin and respiratory irritant in large amounts.