Out of his home workshop in Canton, Cullen crafts exquisite writing tools, doing his own wood and metalwork and using materials deeply rooted in pop culture history.

"This is actually the wood from the 'Shawshank Redemption' tree,” says Cullen, holding up a piece of wood that he’ll eventually transform into one of his unique creations.

What started as a hobby more than a decade ago has turned into a business, called Hooligan Pens — and Cullen’s work is now sought-after around the world.

"You know, I like to stay humble, but I can say that I'm well-known somewhat throughout the custom pen-making world ... and that most people who make pens know who I am,” he says. 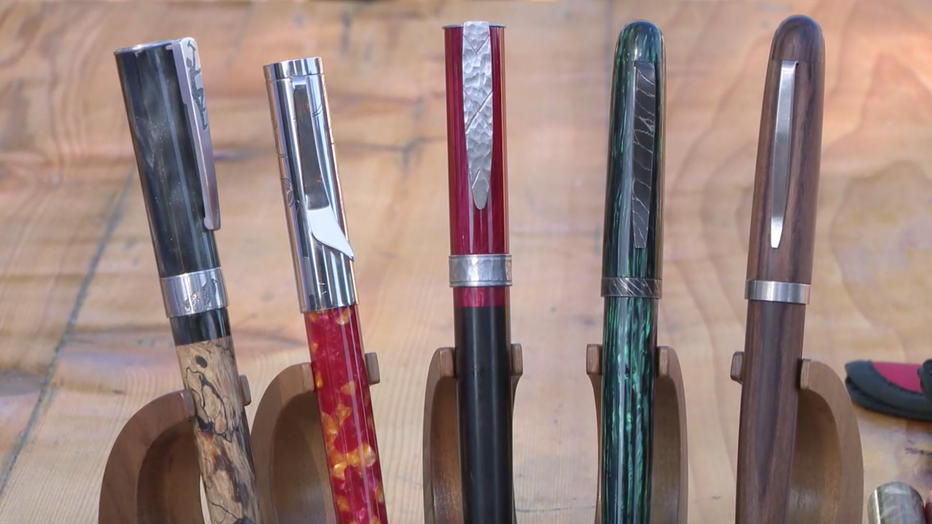 But ask him what really makes him proud, and Cullen will point to his Hooligan Georgia Beat Cancer Pen Project Facebook page, on which he chronicles his work making one-of-a-kind pens for people battling cancer.

"Several years ago, when I was still working in Southern California, my boss ... was going through breast cancer,” Cullen says. "And I decided to make her a pen. And then I got the idea, and I've been making them ever since."

Cullen’s latest project is a pen for Mississippi resident Eric Wang; it’s a personal one for Cullen, who’s known the Wang family for more than 30 years.

"Eric is suffering from leukemia,” he explained. "They looked for donors, and they thought they had a donor, but at the last minute the donor pulled out. And now the cancer treatment's not helping. So, he's in dire need of a bone marrow transplant."

Cullen says the pen will be orange — the color of the leukemia ribbon — and will feature Wang’s hockey number.  Cullen’s hope is that as he chronicles his work on Facebook, it’ll capture the attention of people around the world — possibly someone who could be a bone marrow match for Wang.

Proving sometimes a pen doesn’t need to waste any ink at all to deliver a meaningful message.