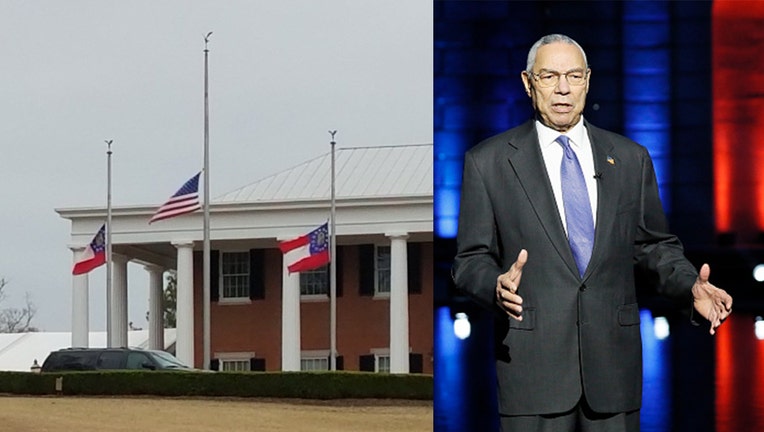 ATLANTA - Georgia’s governor has ordered all flags at state buildings to be lower to half-staff through Friday to honor the late Colin Powell.

"It is fitting and proper to recognize General Colin Powell’s service to the citizens of the United States of America by lowering the flags throughout Georgia to half-staff."

The former U.S. Secretary of State died Monday at age 84 from complications of COVID-19 despite being fully vaccinated. He had been treated over the past few years for multiple myeloma, a blood cancer.

Powell played a pivotal policy role during the George W. Bush administration. He also broke barriers as the first African American to serve as chairman of the Joint Chiefs of Staff and secretary of state.

Powell served Democratic and Republican presidents, including during the tumultuous years following the Sept. 11 terrorist attacks.

Born April 5, 1937, Powell was the son of two Jamaican immigrants and raised in the South Bronx. He attended City College of New York, where he began his military service by joining the Reserve Officer Training Corps (ROTC).

In 1989 he was promoted to the rank of general and was appointed by former President George H.W. Bush to the position of Chairman of the Joint Chiefs of Staff. Over four years, he oversaw several crises, including Operation Desert Storm in 1991.

He was appointed Secretary of State by former President George W. Bush in 2001 and served through 2005. His term was dominated by the challenges the Bush Administration faced after the Sept. 11, 2001, terrorist attacks.

Colin Powell, the influential former U.S. secretary of state who played a pivotal policy role during the George W. Bush administration, died Monday due to complications from COVID-19, his family said in a statement. He was 84.

Powell was the first American official to publicly lay the blame for the attacks on Osama bin Laden’s al-Qaida network. He made a lightning trip to Pakistan in October of 2001 to demand that then-Pakistani President Pervez Musharraf cooperate with the U.S. in going after the Afghanistan-based group, which also had a presence in Pakistan and where bin Laden was later killed.

As President George W. Bush’s first secretary of state, Powell led a State Department that was dubious of the military and intelligence communities’ conviction that Saddam Hussein possessed or was developing weapons of mass destruction. And yet, despite his reservations, he presented the administration’s case that Saddam indeed posed a major regional and global threat in a speech to the UN Security Council in the run-up to the war.

That speech, filled with his display of a vial of what he said could have been a biological weapon, was later derided as a low-point in Powell’s career, although he had removed some elements that he deemed to have been based on poor intelligence assessments.

DESPITE COVID-19 VACCINATION, COLIN POWELL DIES OF COMPLICATIONS OF VIRUS

Breakthrough COVID-19 cases for those with underlying problems

Colin Powell's death due to complications from COVID-19 is shining a spotlight on breakthrough cases in those who have had underlying health problems. Powell had been treated over the past few years for multiple myeloma, a blood cancer.

Throughout his career, Powell received numerous U.S. and foreign military awards and decorations.

His civilian awards include two Presidential Medals of Freedom, the President’s Citizens Medal, the Congressional Gold Medal, the Secretary of State Distinguished Service Medal, and the Secretary of Energy Distinguished Service Medal. Several schools and other institutions have been named in his honor and he holds honorary degrees from universities and colleges across the country.

Following his retirement, Secretary Powell wrote his best-selling autobiography, "My American Journey", which was published in 1995. Additionally, he pursued a career as a public speaker, addressing audiences across the country and abroad.