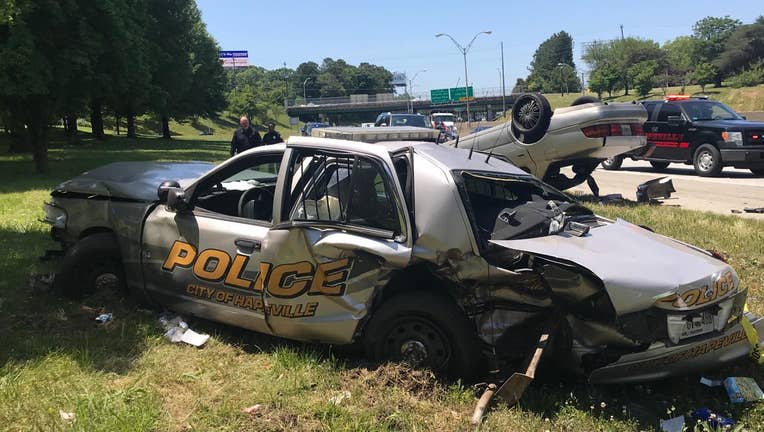 HAPEVILLE, Ga. - A Hapeville police officer has been rushed to the hospital after being injured in an accident on Interstate 85.

The Hapeville Police Department said Traffic Unit Officer Brandon Hickman was conducting a traffic stop on the right shoulder of I-85 northbound Tuesday afternoon when a passing motorist lost control of their vehicle.

The motorist crossed three lanes of traffic and hit Hickman's patrol car in the rear, forcing it into the vehicle he had stopped.

In the photo shared by the police department, Hickman's car's driver side and back were extremely damaged. The other vehicle, which officials say is a Lexus, was fully flipped over.

The accident knocked Officer Hickman unconscious, though officials say by the time he was transported to Grady Memorial Hospital he was conscious and breathing on his own. No word on the extent of his injuries at this time. Before Medical units arrived at the scene, passing motorists removed Hickman from the car.

Two occupants of the stopped vehicle were also transported after complaining of injuries, but officials say they do not appear to be seriously injured.

The driver of the car that caused the collision refused medical attention and was able to walk away, officials said.

Hapeville police are asking for prayers for Hickman and the other drivers and passengers involved.

If you are on the interstate, officials say you should not stop to take photos or ask officers about the wreck.

"Our officers will continue working and will ticket during this event. 116 would insist that we continue to work," police said

Hickman has been with the Hapeville Police Department since December of 2014.

An investigation into the crash is ongoing, with officials saying speed is a "major factor."