A comment picked up by a hot mic following a Gwinnett County School Board meeting has some parents upset.

GWINNETT COUNTY, Ga. - A Gwinnett County School Board Member is facing backlash for a comment she made after a meeting Thursday night. Louise Radloff can be heard saying what critics say sounded like she could strangle another board member.

"It's reprehensible, and there was a lot of legitimate outrage from folks who texted me," said Everton Blair, Gwinnett County School Board Member.

Blair said he didn't hear the comment until after the meeting ended. The meeting ended after he questioned the board for its plan to move forward with reopening schools this fall.

"I don't understand how we can lead the number of cases in this state and choose not to do something else right now," said Blair on Thursday.

Immediately after, the meeting was adjourned by Louise Radloff. Radloff has served on the board for almost 50 years. That's when Radloff can be overheard talking on a hot mic. It was a muffled comment many say sounded like she could strangle Blair.

"My honest reaction is just why that as a response to what I felt like were very legitimate concerns," said Blair. 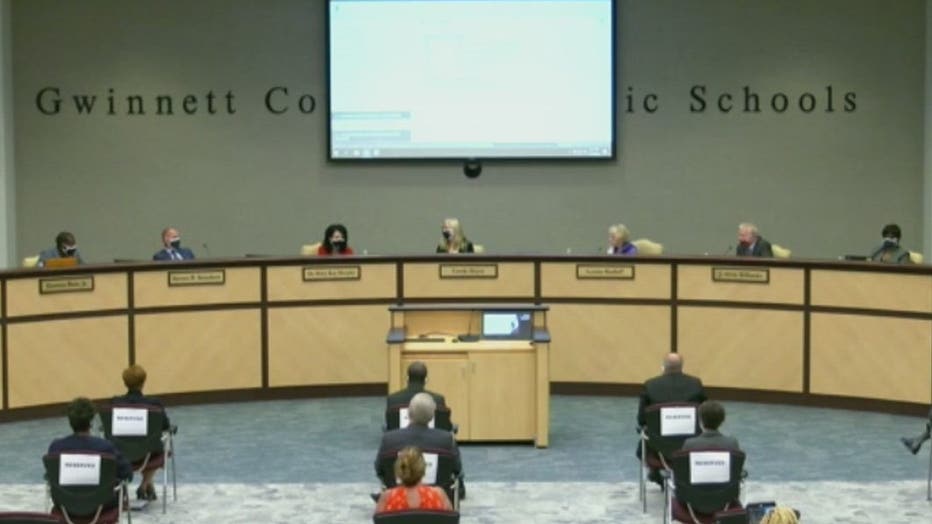 Superintendent J. Alvin Wilbanks released a statement about Radloff's comment saying in part, "It was a regrettable statement that caused pain and anger for many in our community. That is unacceptable and cannot be condoned. The comment, while inappropriate, does not reflect the heart of the Louise Radloff I have known for almost 40 years."

Some parents online have been outraged by the comment.

"When you use words like strangled and you're referring to an African American male, given the history that we have in this country with hangings that are still going on, I think it was reckless," said Karen Scott Greene, a Gwinnett County parent.

Blair tells FOX 5 he is not focusing on the comment. He is instead focusing on getting kids back to school this fall safely. He believes in-person instruction should not be on the table right now.

"I think that unfortunately where we are right now with the surge in cases and demands on our staff, it is just impractical to open our schools for this many students in person," said Blair.

FOX 5 made numerous attempts to reach out to Radloff. She did not return any of our calls or e-mails. Blair says he also has not heard from Radloff.