Faculty and staff say it is time for another mask mandate on college campuses across Georgia. Monday, they kicked off what will be a week of protests at Georgia State, Georgia Tech, the University of Georgia and other state university system schools.

University System of Georgia regents previously ignored demands from some faculty to require COVID-19 vaccinations or masks to slow the transmission of the coronavirus. Instead, the system mandated that its 26 schools couldn’t require any of those things, sparking widespread faculty protests. A handful of faculty and employees were fired or resigned because they refused to follow the rules.

It’s unclear how many employees and student workers the federal rules will cover in Georgia.

But it could be a sizeable share of workers on campuses that get the most federal money. A Georgia Tech professor wrote Friday on Twitter that officials during a town hall estimated that about 77% of the school’s more than 14,000 employees are covered. Georgia Tech hasn’t responded to questions about the issue that The Associated Press first posed by email and phone on Wednesday. 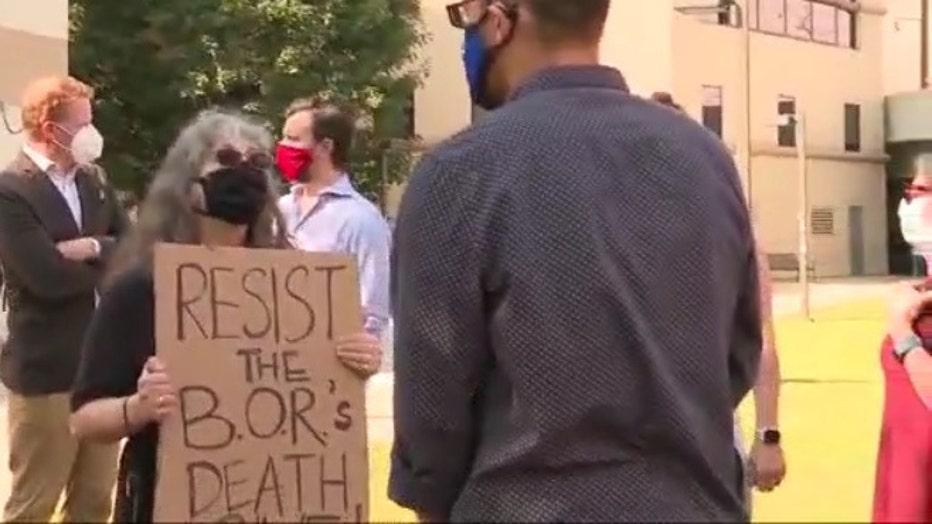 A small group of Georgia State faculty and staff demand the University System Georgia Board of Regents implement a mask mandate in September. (FOX 5 Atlanta)

Also covered are employees who provide support functions such as human resources and billing, as well as other employees who aren’t supported by federal money, but who are in the same building or workplace as federal contract employees.

People with disabilities or sincerely held religious beliefs can be exempted from vaccination, but it’s not clear how broad those exemptions will be. Georgia State told its employees that those who have already been inoculated will have to upload proof by computer.

The share of workers covered is likely to be the highest at the four designated research institutions — Augusta University, the University of Georgia, Georgia State University and Georgia Tech.

"The university receives hundreds of millions of dollars annually pursuant to federal contracts," UGA President Jere Morehead wrote on Tuesday. "This funding is critical to our mission."

Some schools won’t be affected. The University of North Georgia told faculty it has no federal contracts covered by the rules.

All covered workers must be fully vaccinated by Dec. 8, meaning time is short for those who haven’t yet received doses. It’s already too late for employees who might like to receive the Moderna vaccine, which requires a four-week wait between doses. The deadline for employees to start the two-step Pfizer vaccine is Wednesday, UGA and Georgia State told employees. Those wanting to get the one-dose Johnson & Johnson vaccine have until Nov. 24.

Morehead wrote that "given the federal government’s broad interpretation of what constitutes a covered workplace," mask requirements "will likely apply to many areas of our campuses." He said the university would post signs on buildings and ask faculty to socially distance classes "to the extent practicable." The system required colleges to mostly teach classes in person this year, and campuses are generally full.

Universities in some other Republican-led states are requiring all employees to be vaccinated, shortcutting compliance issues. Georgia schools say they are individually notifying employees, which will leave exempted some employees who federal dollars don’t touch.

"Augusta University will notify all employees who fall into these categories for which a vaccine is required once our review is complete," wrote Heather Henley, a spokesperson for Augusta University.

It’s unclear when notifications will be finished. Henley said Augusta has more than 200 contracts, but provided no estimate of how many of its 6,800 faculty and staff are covered. She said the school "is actively working through the details of implementing the guidelines."

Janet Frick, a psychology professor at UGA who has been a vocal proponent of requiring masks and vaccines, said some of her UGA colleagues have been notified of the requirement, but said other employees have received no clear guidance.

"The deadline is fast approaching," Frick tweeted this week. "And meanwhile our attorney general is suing against the mandate. This lack of clarity combined with mixed messaging from our state leadership has the potential to place millions of dollars in federal contracts in jeopardy."

University System of Georgia spokesperson Lance Wallace said the schools are working with state Attorney General Chris Carr to implement the rules at the same time the elected Republican is suing to block them.

"USG continues to encourage all students, faculty, staff and visitors to get vaccinated either on campus or with a local provider and wear a mask or face covering while inside campus facilities," Wallace wrote.