It is either mask up or leave. That’s the message from one esteemed UGA professor to his students. Joseph Fu says he's defying the university's stance on mask mandates to protect himself and his students. And as a week of protests on college campuses across the state kicks off, Fu says he’s prepared to lose his job over it.

ATHENS, Ga. - Longtime mathematics professor Joseph Fu told students that if they want to be in his class at the University of Georgia, they must wear a mask.

He said that mandate is putting his job in jeopardy.

"Basically they’re telling me I can’t do what I’m doing," Fu said. "They’re saying that it’s exposing me to disciplinary action, but so far I haven’t received any."

Fu is one of many professors throughout the state angered by the University System of Georgia’s decision to decline to require masks as COVID-19 case numbers and hospitalizations surge.

The system, which is comprised of 26 colleges throughout the state, has "strongly recommended" masks according to its website, but has stopped short of requiring them. Critics of that decision say the Board of Regents, which runs the university system, is trying to appease Republican Gov. Brian Kemp, who has been adamantly opposed to mask and vaccine mandates.

"The policies of the University System of Georgia are a product, it seems clear, of political pressure from the governor," he said.

Protesters rallied in favor of mask and vaccine mandates at several campuses on Monday.

"The numbers just don't support taking a 'Well, if you feel like it' approach," said Dr. Janet Frick, a psychology professor at the University of Georgia. "We need our leaders at our university to speak in favor of science-based policy and we need the governor and the Board of Regents to institute policies that are scientific and evidence-based." 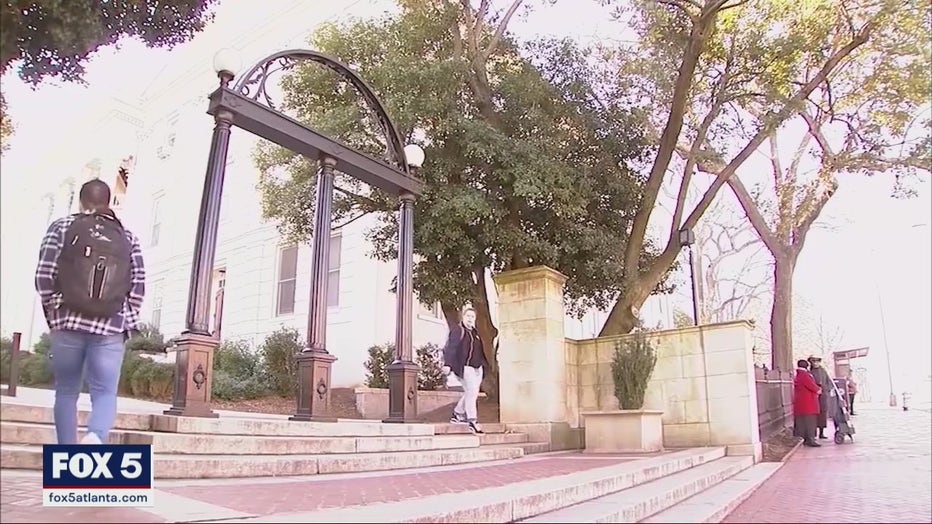 The rally on UGA’s campus also drew a significant number of counter-protestors outside of the Tate Student Center. "Clarke County, GA [is] 55% unvaccinated. It's their choice," argued Mike Francis, who is working on his Ph.D. at UGA. "They've made that choice for whatever American reasons that they want to make it."

Georgia State University staff member Cody Mullins Luedtke was fired because she would only teach in-person if masks were worn in her classes, the AJC reported. Earlier in the semester, an 88-year-old psychology professor at UGA up and quit in the middle of class because a student refused to put on their mask correctly.

Fu said he hasn’t received any push back from his students.

"The students who speak to me about it have been very positive," he told FOX 5’s Rob DiRienzo. "I’ve had no problems at all with cooperation with the mask mandate."

The professor pointed out that since he is tenured, it is harder to fire him than it is for other university system employees.

Still, he said he’s sticking to his guns, adding that if students don’t want to wear a mask, they can attend via Zoom.

"You carry-on instructing in a safe way, if it’s not good with the bosses, let them kick you out," Fu said. "I’m going to continue to teach my classes in a way that is safe and that does not egregiously contribute to the harm that’s being done around the campus."