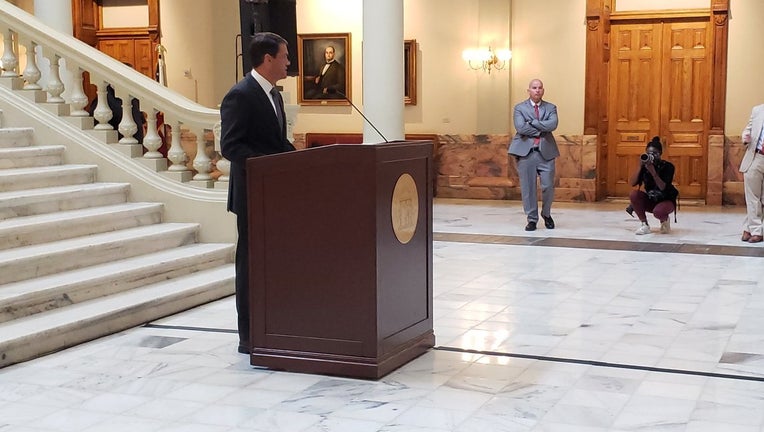 ATLANTA - Lt. Gov. Geoff Duncan has unveiled his own proposal to create a statewide hate crime charge in Georgia.

Speaking at the Georgia Capitol Wednesday morning, the lieutenant governor said his measure "empowers victims and communities" and makes a hate crime a standalone criminal charge.

“As a man of faith, I believe we are called to treat others as we’d want to be treated, but to also stand up for the vulnerable, to comfort the afflicted and welcome the ostracized,” Duncan said. “I believe this legislation answers that call, and I will work hand in hand with legislators in both parties and in both houses to ensure we get this over the finish line.

Georgia is one of four states without a state law that imposes harsher sentences for crimes committed out of bias. There is also a federal hate crimes law. State House members last year passed a proposal which would impose additional penalties for crimes motivated by the victim’s race, religion, sexual orientation, gender or other factors.

House Speaker David Ralston has said repeatedly that he wants the measure, which has been stalled in a Senate committee, to pass unamended. Duncan's bill is separate from Georgia House Bill 426. Rather than adding to a violator's sentence, the proposed bill creates a separate offense for crimes deemed "bias-motivated," a change that Duncan said "expands access to justice for victims and ensures due process for those accused."

“I greatly appreciate the leadership that the House has shown on this issue,” Duncan said, “and I think we need to build on that because so much has happened in our state to change hearts and minds since that bill passed the House. We’re going to get this done, we’re going to show the rest of the nation who we are and we’re going to make Georgians proud.”

The new legislation proposed by the lieutenant governor also expands the classes of victims protected to include "exercise of religious beliefs" and "being a member or have served in the armed forces of the United States or National Guard."

The bill would also allow victims to recover damages by allowing them to seek a hate crime charge from a grand jury if the local prosecutors choose not to press the charge. It will also mandate that officers submit reports in cases of hate crimes.

Duncan predicts the legislation will receive a hearing later this week in the committee, according to his chief of staff, John Porter.

“This is an important piece of legislation to get right,” Duncan said.