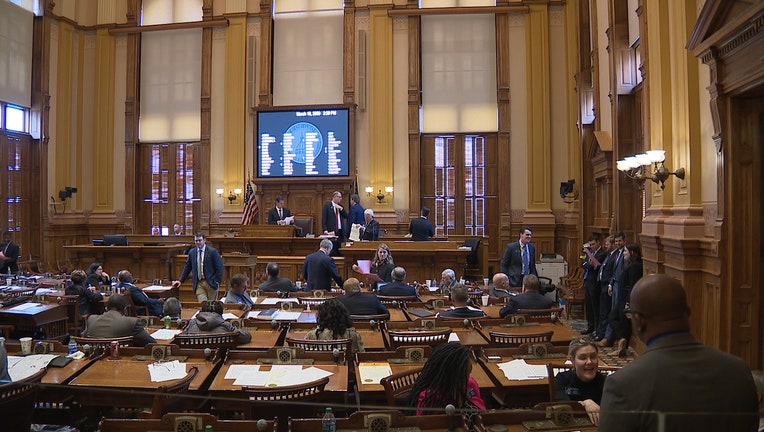 ATLANTA - What was supposed to be a quick, in and out session at the Georgia General Assembly became a nearly all-day affair after members of the House and Senate disagreed about whether the governor should be allowed to extend a state of emergency without their approval.

Gov. Brian Kemp called on the legislature to convene a special session Monday morning to ratify his Public Health State of Emergency for novel coronavirus. The order temporarily gives the governor and state health officials more leeway to relax some regulations and institute others to combat the virus.

"This declaration will greatly assist health and emergency management officials across Georgia by deploying all available resources for mitigation and treatment of COVID-19," Gov. Kemp said Saturday.

The emergency declaration lasts through April 13 at 11:50 p.m. and while the Senate wanted to give the governor the power to extend the state of emergency if needed, the House resolution would have required lawmakers to come back for another special session to ratify an extension.

"It is my concern and other members' concerns that if this outbreak is as devastating and bad as it potentially could be, that if the members of this body were to come down with this sickness and at the conclusion of 30 days we were not able to bring the 3/5ths requirement together to achieve a special session and obtain the 91 votes to renew this emergency, that the emergency powers that are in the hands of the governor, he would not be able to utilize those under this scenario," said Rep. Bert Reeves, R-Marietta.

After hours of meetings behind closed doors, lawmakers were able to reach an agreement and both chambers approved a resolution that does not require them to convene a special session. They have, however, already put one on the calendar for April 15.

"We put it on the schedule.  I hope we're all able to come back and get back to work quickly and get the people's work done.  I mean, there's a lot to be done," said Senate President Pro Tempore Butch Miller, R-Gainesville.

List of tourist locations closed in Atlanta due to coronavirus