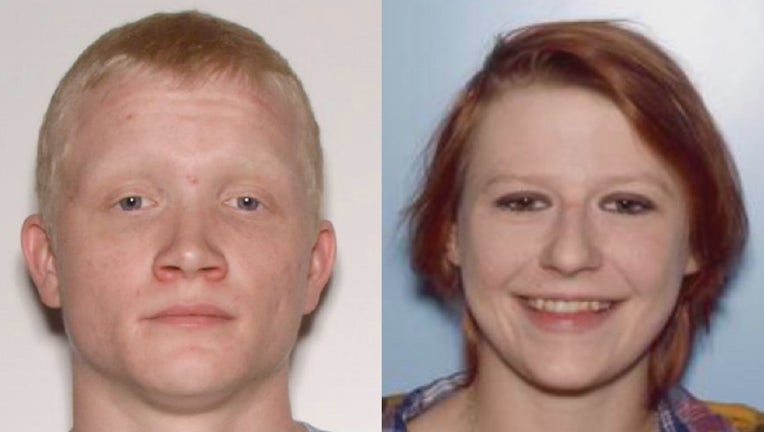 LUMPKIN COUNTY, Ga. - The man accused of killing a 21-year-old missing Lumpkin county woman, is in police custody after turning himself in Wednesday, according to the GBI.

Austin Stryker was arrested in Pennsylvania.

Investigators found the body of Hannah Bender early last Wednesday morning in a field in Forsyth County, after she had been missing for more than a week. Investigators said testimony from different individuals led them to a grave in which she was buried. Her body was found in a property adjacent to where investigators found a black Mazda pickup truck on Tuesday morning which was connected to the case.

"I'd been looking, hoping to find her alive. But in the wee early hours this morning, she was found in Forsyth County," Lumpkin County Sheriff Stacy Jarrard said pausing to fight back emotion. “We feel it is her due to the... some of the marking on the body, some of the tattoos. That has not been 100 percent identified. That will be pending the autopsy results which will take place at the GBI Crime Lab."

The sheriff said they have three crime scenes in three separate counties: Lumpkin, Dawson, and Forsyth counties. He said they processing the scenes for evidence with the help of the Georgia Bureau of Investigation and the county sheriff’s offices.

"I hate to give this kind of news to a father, that I had to give a while ago and my heart goes out to the Bender family,” Sheriff Jarrad said adding he pledges to seek justice for them.

The Georgia Bureau of Investigation took the wife of 22-year-old Austin Todd Stryker into custody. She’s charged in Dawson County.

The Lumpkin County sheriff said Tuesday his office secured a murder warrant against Stryker on Saturday. They continued to search for him and a person of interest, 78-yr-old Jerry Harper, who they believe is with him. Deputies have contacted the U.S. Marshal's Office and have put out a nationwide alert for them.

The sheriff said more arrests and charges are possible.

Deputies previously said they found Hannah's bloody clothes at an undisclosed campsite in the county, plus investigators found her cellphone and some bloody tools in another location in Dawson County.

Investigators said they are still looking for a white 2000 Ford Explorer with the tag PXH4402.

Bender’s body will be taken to the GBI Crime Lab for an autopsy.

Gary Bender, Hannah’s father stood by the sheriff during Wednesday’s press conference, standing as poised and controlled as he could given the extreme circumstances.

"This has been a really hard time for my family," Gary Bender said, adding his thanks to the sheriff and his office for their efforts in finding answers for them.

"The experience that we've been having has been compounded and aggravated by the social media aspect of it. Everybody speculating, and throwing facts out not knowing what they are talking about, it's made it extremely difficult for us,” Mr. Bender expressed. "I want to ask everybody that if you really do care, if you know carol, or you know Hannah, or you know anybody in my family, and you care about us, stop speculating and throwing that garbage out there online. If you don't have anything positive to say, just shut up. We don't need any more of it.”

"If you would, please keep the Bender family in your prayers because... I'm a father also and I couldn't imagine having the news they have gotten today. So, just remember that," the sheriff said.