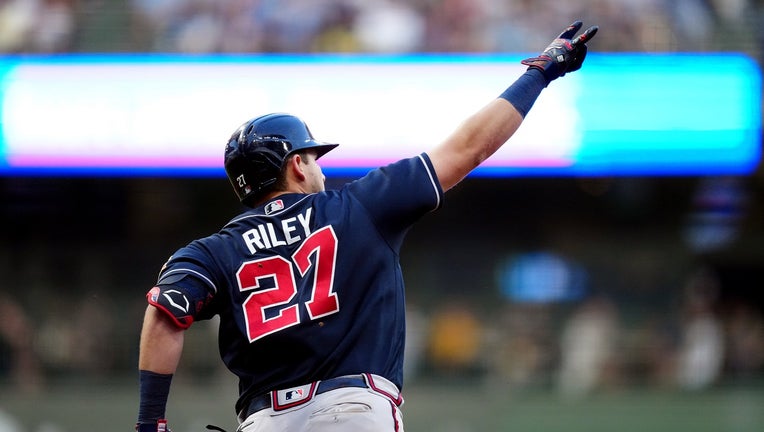 Austin Riley #27 of the Atlanta Braves rounds the bases after hitting a solo home in the sixth inning during Game 2 of the NLDS between the Atlanta Braves and the Milwaukee Brewers at American Family Field on Saturday, October 9, 2021 in Milwaukee, W

The Brewers brought the tying run to the plate in each of the last three innings but couldn’t get a key hit.

Austin Riley homered and Ozzie Albies hit an RBI double for the Braves, who bounced back after losing 2-1 in Game 1.

The best-of-five series heads to Atlanta for Game 3 on Monday.

Fried struck out nine, allowed three hits and didn’t walk anybody. The Brewers didn’t get a runner in scoring position until Willy Adames hit a two-out double in the sixth, and Fried responded by striking out Eduardo Escobar.

The left-hander went 7-0 with a 1.46 ERA over his last 11 regular-season starts. Counting Saturday’s performance, Fried has allowed just one earned run over 29 innings in his last four starts.

This was the second straight exceptional outing by a Braves starter in a series that has been dominated by pitching.

Atlanta’s Charlie Morton held Milwaukee scoreless through six innings Friday, but allowed a two-run homer to Rowdy Tellez in the seventh inning on his 85th and final pitch.

Snitker made sure Fried didn’t get quite that far. Fried had thrown 81 pitches when he was pulled for a pinch-hitter in the top of the seventh.

Then the Brewers made things interesting against Atlanta’s bullpen.

After reliever Luke Jackson struck out the first two batters he faced in the seventh, Luis Urías singled and Lorenzo Cain walked to bring the potential tying run to the plate. Tyler Matzek replaced Jackson and got out of the jam by striking out pinch-hitter Tyrone Taylor.

Jace Peterson walked and Kolten Wong singled to start the bottom of the eighth, but Matzek worked out of it by retiring Adames, Escobar and Avisaíl García in order.

Will Smith worked around a leadoff walk to Yelich and a single by Urías in the ninth by getting a flyout and a groundball double play for his first career postseason save.

Four Atlanta pitchers struck out and combined on a six-hitter.

The Braves took a 2-0 lead in the third off Brandon Woodruff and were inches away from getting a third run in that inning.

Soler hit a one-out double down the left-field line and beat the throw home when Freddie Freeman singled to right. Albies drove in Freeman with an RBI double that went off the yellow at the top of the right-field wall.

Albies was left stranded at second, but the Braves extended the lead to 3-0 three innings later when Riley sent an 0-1 pitch over the center-field wall.

Woodruff struck out seven while allowing three runs, five hits and one walk in six innings. The All-Star right-hander had the worst run support of any major league starting pitcher during the regular season, which explains why he went 9-10 despite owning a sparkling 2.56 ERA.

With no rain in the forecast and temperatures in the 70s, Saturday marked just the third time the roof was open for a playoff game at American Family Field. Of the 16 playoff contests at this stadium since its 2001 opening, the only others to take place outdoors were the first two games of the 2011 NL Championship Series.

The series heads to Atlanta with RHP Ian Anderson (9-5, 3.58 ERA) pitching for the Braves on Monday. The Brewers haven’t announced their Game 3 starter.