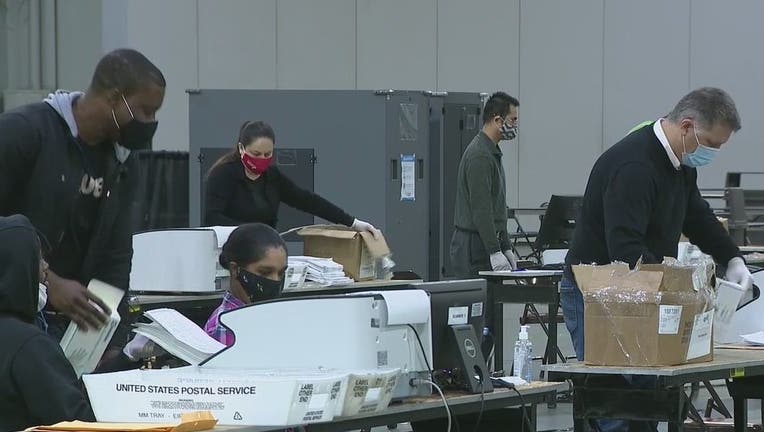 ATLANTA - Fulton County leaders are reacting after Henry County Superior Court Judge Brian Amero on Friday agreed to unseal absentee ballots to allow for yet another audit of November election results in Georgia’s most populous county.

There have already been three recounts of Georgia’s election results from November including a recount by hand.

Friday’s ruling stems from a lawsuit against the county that alleges evidence of fraudulent ballots and improper counting. The judge said he’ll order county officials to scan the ballots and produce high-resolution images. The plaintiffs plan to use those images to determine whether the ballots were completed by hand or machine to determine their legitimacy, the newspaper reported.

The plaintiffs, nine Georgia voters, will pay for the audit, according to reports.

"Well, I’m actually stunned that this whole thing is a circus that won’t end, quite frankly. Fulton County, we’ve had a target on our back going back to 2020," Pitts said. "No one has come forward with any credible evidence, in fact, after our 2020 elections, the secretary of state even applauded us for the great job that we’d done, so it’s just ridiculous that this witch hunt continues."

Chairman Pitts said he has no doubt the results of this next audit will be the same as the first three. He said it is "outrageous that Fulton County continues to be a target of those who cannot accept the results from last year’s election."

"The votes have been counted multiple times, including a hand recount, and no evidence of fraud has been found," Pitts said, "The fact remains that Fulton County safely and securely carried out an election in the midst of a public health crisis. It’s a shame to see that the ‘Big Lie’ lives on and could cost the hardworking taxpayers of this county."

The plaintiffs wanted to take the absentee ballots to a private company for scanning and inspection, the newspaper reported. But Amero cited federal and state law Friday in saying that county election officials must retain custody of the ballots during the audit. That could avoid issues like those raised during an audit in Arizona.

Georgia election results were certified months ago, and this audit cannot change the results. Before certification, the state did a full-hand recount of the presidential race to satisfy a new audit requirement in state law. Another recount, in which the ballots were run through scanners to be tallied again, was done at the request of former Republican President Donald Trump’s campaign after he lost by a narrow margin to Democrat Joe Biden.

State and federal officials have repeatedly said there was no evidence of systemic fraud in the 2020 election.

In a brief filed in court last month, Secretary of State Brad Raffensperger opposed unsealing the paper ballots but did not object to releasing scanned images of the ballots.

"From day one I have encouraged Georgians with concerns about the election in their counties to pursue those claims through legal avenues," Raffensperger said in a statement Friday. "Fulton County has a long-standing history of election mismanagement that has understandably weakened voters’ faith in its system. Allowing this audit provides another layer of transparency and citizen engagement."