FULTON COUNTY, Ga. - It sounds like the 2020 presidential election in Georgia all over again.

The drama centers on a vote for the new Fulton County GOP chairperson, a voluntary position to activate Republicans in the state's largest county as they try to flip the state back to red.

An influx of former President Donald Trump-supporting newcomers disillusioned by the 2020 election flocked to the convention to get involved, but a bizarre vote involving colored discs and red plastic cups has left the future leadership of Atlanta-area Republicans up in the air.

The timing of the GOP allegations of sloppy elections and voter disenfranchisement is especially ironic after Georgia Republicans – preaching voter integrity – passed a sweeping elections reform bill in response to the 2020 election where President Biden and Sens. Jon Ossoff and Raphael Warnock flipped the state blue.

The convention was "a massive disappointment [and] a major black eye for the Republican Party, specifically Fulton County," Zach Hines, vice chairman of the Fulton County GOP, said in a recent YouTube video post. "We're a national embarrassment right now."

Opraseuth and her allies had requested the vote for chair be conducted by paper and even brought ballots to the April 17 convention. Given all the skepticism over votes during the presidential and Senate elections, they argued a paper trail was necessary to build trust and transparency.

But the leadership of the Fulton County GOP decided to vote by tiny colored chips, which Opraseuth described as "translucent Tiddlywinks." Opraseuth was assigned yellow chips and Kelly blue chips. And then various people walked around with red Solo cups to collect the colored tokens from the delegates, she said.

"We've never even heard of anything like that in high school," Opraseuth said of the voting mechanism. "It's very childish. This was all orchestrated by Trey Kelly and company."

Even the chairperson of the state GOP called the voting system that Fulton employed very different than how other counties ran their conventions.

"To my knowledge, this was a novel approach," David Shafer, chairman of the Georgia Republican Party, told Fox News.

Critics panned the chip system because it was hard to see the translucent colors in a dimly lit room; delegates weren't separated from non-voting delegates when the red cups were passed around, and the convention leaders didn't show that the cups were indeed empty before the chips started going in, according to Opraseuth's supporters.

At the end of the vote, there was an obvious problem: There were more tiddlywink chips cast than there were actual legitimate delegates.

Kelly had 167 blue chips, Opraseuth had 164 yellow chips, for a total of 331 votes. There were only 330 delegates eligible to vote, however, according to the minutes of the convention obtained by Fox News. 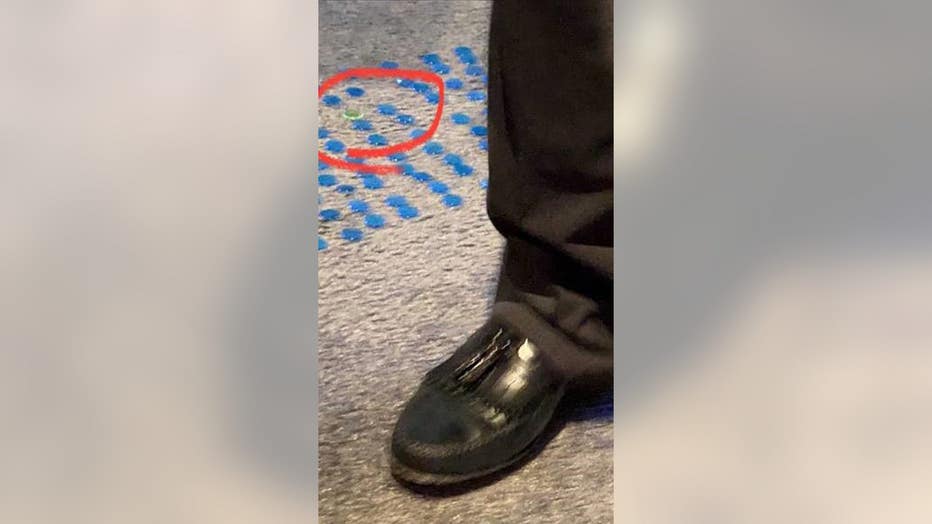 Photo of vote counting of colored chips at Fulton County GOP convention on April 17 in Georgia where a greenish chip was in the mix of blue. (Courtesy of Jamie Parrish)

And to make matters more complicated, Opraseuth's team claims there were suspect chips in the mix, including one chip caught on camera that was neither blue nor yellow but was apparently counted for Kelly. The color appears to be lime green in a photograph provided to Fox News.

Still, the convention chairman declared the winner was Kelly, the incumbent. Opraseuth's supporters were in an uproar and claimed cheating by Kelly's team. They demanded Kelly's win be overruled, and a majority of the convention delegates agreed by a standing vote.

"It was done in a very non-transparent way, and I think they orchestrated it for mass confusion," said Opraseuth, who dubbed the first vote "illegal" for the mismatch of delegates to total chips. "If it wasn't cheating, it was definitely irresponsible and negligent – particularly in view of what we have been through as a country and as a state with our 2020 presidential election."

Kelly pushed back on the allegations of cheating.

"The fact that they are trying to say that I wanted some chip system so that we could cheat in the election is absolutely ridiculous," Kelly told Fox News.

The convention took a second vote with the tiddlywinks. This time Kelly was assigned red chips and Opraseuth purple chips. Instead of numerous red cups floating around the room to collect the chips, delegates formed a single line. Checks were made to ensure that only those donning yellow wristbands for delegate status cast their chips into a clear vase, Opraseuth said. Kelly panned the clear vase system as negating the goal of a secret vote.

Opraseuth said this count was much more orderly and transparent. She won, with 172 purple chips to Kelly's 148 red ones, for a total of 320 votes.

Opraseuth left the convention a winner and started to get to work as the new chairperson of the critical county in the important swing state.

But all that changed when Kelly filed a successful appeal to overturn the convention election results, claiming procedural errors.

Kelly argued in his official appeal that the effort to overturn his initial win violated Robert's Rules of Order, which governs convention procedures. And even if the delegates had properly contested the first election results, it wouldn't have mattered since the one-vote discrepancy of the 331st delegate chip would not have affected the outcome of his three-vote win.

By a vote of 8-0, the Fifth Congressional District GOP executive committee voted in favor of Kelly's appeal and essentially said he was the actual winner of the convention vote.

"While I know nearly half of our delegates did not select me as their first choice to lead this party, I promise you that I will be everyone’s chairman and I will strive every day to earn your trust and support," Kelly wrote. "For the majority of those that did vote for me, thank you for your continued trust and confidence. With the high stakes ahead we face, it is now time for everyone to join together as one."

That gesture seemed to cause more confusion because Opraseuth was still operating as chairwoman and had the blessing of Shafer, the Georgia GOP chairman.

To avoid the chair position potentially changing hands multiple times during the appeals process, Shafer sent an email that said the winner from the convention – Opraseuth – "will remain the County Chairman until the appeal is finally resolved."

Opraseuth has since reasserted her authority and is appealing to the state level to settle the dispute. That appeal is ongoing.

Her allies are mounting an all-out public affairs campaign dubbed "Stop the Steal 2" that channels the frustration pro-Trump newcomers to party politics have toward the establishment.

They've collected nearly 100 signed affidavits attesting to perceived shenanigans at the convention, filmed on-camera eyewitness testimonials of delegates raising alarms about the election process and sent out fiery literature to orchestrate a pressure campaign on the GOP officials involved in the appeals process.

"It's time that we as Republicans can have faith in our party again," says one alert to Fulton County delegates. "We have to take it back from the corrupt political elite like Kelly and his cronies."

Kelly said in a statement to Fox News that he won the only valid vote for chairman at the convention and he's confident that his victory will be upheld.

He said he trusts the process will work in his favor.

"I am confident that because I won the only valid election for chairman of the Fulton County Republican Party that the [county] delegates' choice and the Fifth District’s decision will be affirmed in the event my challenger appeals," Kelly said. "I look forward to getting this internal party matter resolved so that the Fulton GOP and I can concentrate on expanding our base and winning the partisan elections next year."

Jamie Parrish, a former county GOP official who is now pushing the "Stop the Steal 2" campaign, said much distrust lingers among Republicans with how Georgia GOP elected officials handled the November election. So botching a county GOP election over voting problems is an especially bad look.

"If we can't manage integrity at the county level, how do we ever expect to gain trust, as far as voter confidence and free and fair elections go, at the state and national level?" Parrish said.

The election also reflects the impact that Trump and his 2020 loss in Georgia still have on the party. Opraseuth, who works in commercial real estate, said she decided to get involved in GOP politics this year because she didn't think Kelly rallied Atlanta-area Republicans enough for Trump and the lack of grassroots organization could have cost the Republicans Georgia.

But Kelly contends that "no one worked harder for President Trump than I did in Georgia." He said replacing a proven leader with someone with no experience in GOP politics "is not a practical solution."

There's been a fresh wave of Trump-loving, America First Republicans joining the party this year, Parrish said, and they, at times, have clashed with the establishment. The state GOP chairman calls it "growing pains."

"One of my concerns when we lost all these elections, was that people would just give up on the Republican Party, and give up on resisting the progressives, but that's clearly not happened," Shafer said. "There's been a surge of interest, but the people that are interested are just are distrustful of authority – of all types of authority – and there’s some growing pains."

Get more updates to this story on FoxNews.com.