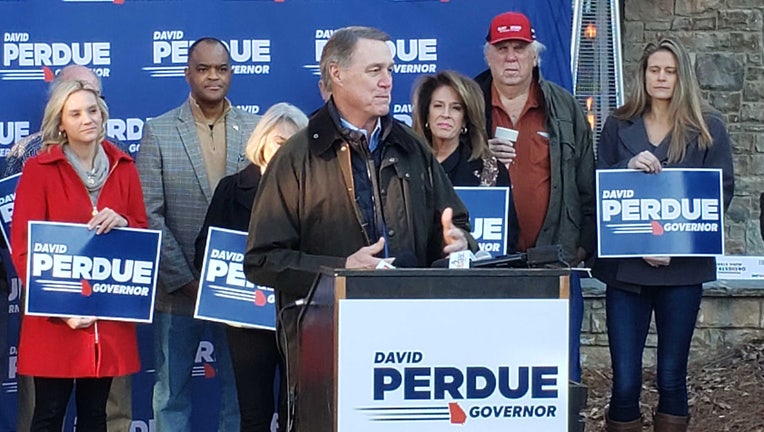 Perdue launched his campaign kickoff tour, which continues through Feb. 5, outside of Central City Tavern in Alpharetta.  (FOX 5 Atlanta)

Perdue's kickoff tour began in sync with the launch of a new campaign advertisement that featured former President Donald Trump, providing his "complete and total endorsement" of the former Georgia senator.

The 30-second ad describes Purdue as an "America-first conservative outsider."

The ad goes on to call Perdue the only candidate endorsed by the former president.

"I’m proud to have President Trump’s Complete & Total Endorsement," Perdue said in a tweet. "Georgians are tired of do-nothing, weak-kneed politicians. As Governor, I’ll be a fighter, who never caves to the woke left.

"Conservatives know they can count on me to secure our elections, stop Stacey & save GA!"

Perdue’s campaign told Fox News it’s spending in the low six figures to run statewide on TV and on digital.

Max Flugrath, spokesman for the Democratic Party of Georgia, released a statement calling the ad the latest in an "ugly — and costly — intraparty war."

"Every day that Kemp and Perdue continue their petty fights, it becomes clearer that they’re more concerned with tearing each other down than offering solutions to improve Georgians’ lives. While racing to the extremes, they’re ignoring crucial issues facing Georgians like access to affordable health care, quality education, and creating economic opportunity for all. This election isn’t about Donald Trump — it’s about building a united Georgia where everyone has an opportunity to prosper," Flugrath, stated.

Kemp's response to Trump's unproven claims of fraud in Georgia during the 2020 Election drew anger from the former president.

Kemp recently filed an ethics complaint against Perdue after Perdue has taken aim at a state law that allows the incumbent governor to raise unlimited campaign contributions.

Perdue launched his campaign kickoff tour, which continues through Feb. 5, outside of Central City Tavern in Alpharetta.

"I’m excited to be back on the road talking with Georgia voters about what’s at stake in this election," Perdue said in a statement. "This race is about putting people ahead of politicians, and that’s exactly what I’ll do as Governor. We’ll leave no stone unturned to share our bold vision to unite Republicans, stop Stacey Abrams, and save Georgia. I’m humbled to have received President Trump’s endorsement and look forward to building on our strong momentum."

Perdue is one of a handful of challengers to Kemp.

WHO IS RUNNING FOR GEORGIA GOVERNOR IN 2022?

Perdue has been endorsed by former President Donald Trump.

On the other side of the aisle, voting rights activist and former Georgia House Minority Leader Stacey Abrams is running for the Democrats.