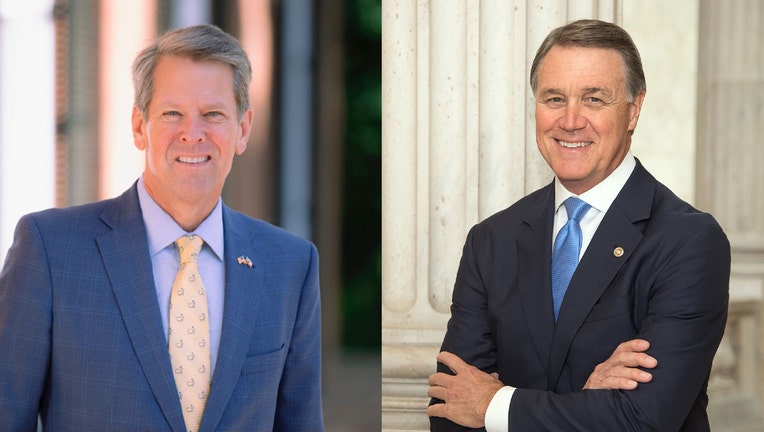 Perdue on Thursday filed a lawsuit challenging the constitutionality of Georgia Senate Bill 221, which allows Kemp – as well as a handful of state legislative leaders – to set up leadership funds or committees that can haul in and spend unlimited amounts of campaign cash. Word of Perdue's filing was shared first nationally with Fox News.

The bill was approved during Georgia’s 2020 legislative session mostly along party lines by the GOP controlled chambers and Kemp quietly signed the measure into law last May. Kemp's campaign created the Georgians First Leadership Committee in June, just days after the new law went into effect.

Kemp's committee doesn't have to adhere to the current fundraising caps for statewide candidates in Georgia, but challengers are not exempt from the campaign cash limits. The current cap is $14,000 per election cycle from individuals – although more can be raised by candidates if there's a primary election as well.

Kemp's leadership committee is allowed to fundraise when the Georgia legislature is in session, unlike the governor's reelection campaign, which under state law is prevented from raising money during the legislative session.

"This unconstitutional law was spearheaded by Brian Kemp to protect himself and silence those who seek to challenge him. It reeks of cronyism and corruption," Perdue charged in statement to Fox News.

"Making sure all candidates play by the same rules is just common sense, but Brian Kemp has abandoned that to advance his own self-interests," the former senator argued.

Emphasizing that he’s an "outsider to this political process," Perdue claimed that "this is the most self-serving thing I’ve discovered so far. Only a 20-year career politician like Kemp would create an unfair advantage to line his campaign coffers for his own self-preservation. He'd never get away with this in the real world."

"David Perdue’s record of shady stock deals makes clear that he really doesn’t like playing by the rules, so this laughable lawsuit shouldn’t surprise anyone, Cody Hall, a senior advisor for the committee, charged in a statement.

Cobb County Schools said they will follow the direction of Gov. Brian Kemp and Georgia Department of Public Health in their new policies concerning students with COVID-19.

"The real question is: why did Perdue’s Senate campaign pay over $600,000 in legal fees in 2021 to the same law firm representing him in this suit?" Hall added.

Perdue’s move came after months of encouragement by former President Donald Trump, setting up an epic GOP primary battle with the conservative incumbent, who for over a year has faced the former president’s rath for not overturning the 2020 election results in Georgia.

President Biden edged Trump by less than 12,000 votes out of nearly 5 million cast in Georgia. The ballots in Georgia were counted three times – the original Election Day count, a mandatory hand recount and a recount requested by the then-president's campaign. Infuriated with the governor, Trump has repeated vowed to return to Georgia to campaign against Kemp for failing to help him overturn the results.

Trump endorsed Perdue a day after the former senator launched his bid.

Perdue, a former corporate chief executive officer who was elected to the Senate in 2014, was defeated in his bid for a second term by a razor-thin margin by Democrat Jon Ossoff  in Georgia’s twin Jan. 5 runoff elections. Democrat Raphael Warnock edged Rep. Sen. Kelly Loeffler in the other contest, handing the Democrats the Senate majority.

Kemp’s built a formidable war chest as he faces challenges from both Perdue and Abrams. The governor hauled in $4 million in fundraising from February of last year through the end of June, with $9 million in his campaign coffer as of the last filing. And the businesses and individuals who contributed to Kemp’s reelection campaign can also give unlimited contributions to his leadership committee.

The current fundraising period in Georgia’s gubernatorial race concludes at the end of the month. The Perdue and Kemp campaigns are expected to file their reports at the beginning of February, which is also likely the first time Kemp’s Georgians First Leadership Committee will file its first fundraising report.

Kemp and his team have a good reason to want to build a massive war chest. Trump's backing of Perdue should quickly help fuel the former senator's campaign coffers. And Abrams is a fundraising giant who set campaign cash records in her 2018 run and who's voting rights group, Fair Fight, has hauled in over $100 million since then.