Perdue throws hat into the ring

ATLANTA - Days after announcing his candidacy for governor, Republican David Perdue furthered embraced debunked claims of electoral fraud in Georgia’s 2020 presidential race by joining a lawsuit seeking to prove he and former President Donald Trump were cheated out of election victories.

The suit claims that fraudulent or counterfeit ballots were counted in Fulton County, the state’s most populous jurisdiction, although investigators rebutted the same claims previously.

Perdue’s lawsuit amplifies claims that the former senator has made this week since announcing a challenge to incumbent Gov. Brian Kemp on Monday. Perdue told Axios and The Atlanta Journal-Constitution that he wouldn’t have certified Georgia’s 2020 results if he had been governor then, unlike Kemp.

Trump has repeatedly savaged Kemp for not doing enough to overturn the loss. After inviting Perdue to run, Trump endorsed Perdue on Monday, saying Kemp has been "very weak" on "election integrity."

The suit could further Perdue’s effort to sew up the votes of Trump backers who believe the election was stolen as he tries to come back from his Senate election loss, saying that’s how he’ll unify the Republican Party and beat Kemp in the primary and then Democrat Stacey Abrams. 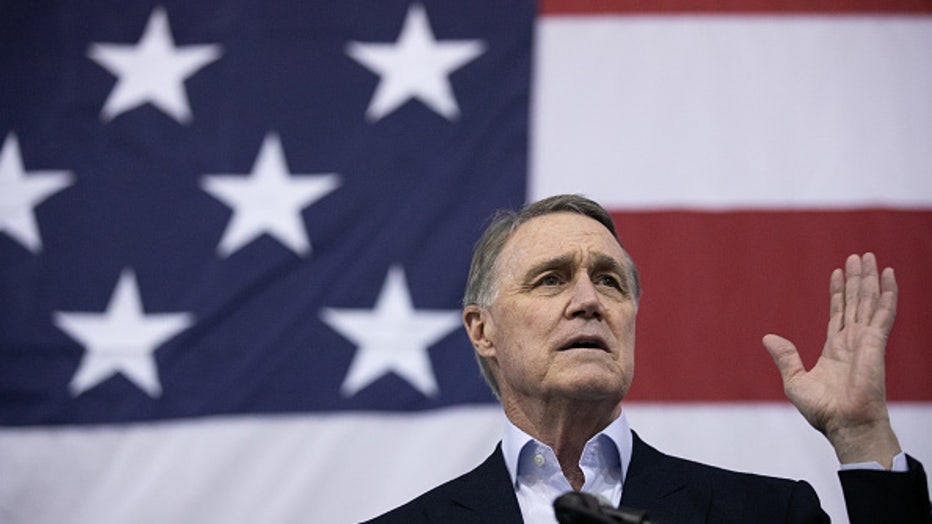 His position that Georgia’s 2020 election was wrongly decided isn’t new. He called on Republican Secretary of State Brad Raffensperger to resign while votes were still being counted in 2020, saying he "failed to deliver honest and transparent elections," said if he had been in the U.S. Senate on Jan. 6, he would have voted against accepting Georgia’s electoral votes. But until now he hadn’t sued.

"David Perdue is so concerned about election fraud that he waited a year to file a lawsuit that conveniently coincided with his disastrous campaign launch," said Kemp spokesperson Cody Hall. "Keep in mind that lawsuit after lawsuit regarding the 2020 election was dismissed in part because Perdue declined to be listed as a plaintiff."

Fulton County voter Elizabeth Grace Lennon and Perdue are seeking to examine paper ballots and other ballot materials in Fulton County in the state court lawsuit, saying that will prove the fraud. The suit, however, does not seek to overturn the results of the election, in which Georgia gave its 16 electoral votes to Democratic President Joe Biden.

"I want to use my position and legal standing to shine light on what I know were serious violations of Georgia law in the Fulton absentee ballot tabulation," Perdue said in a statement released by lawyers. "We are asking a judge to consider the evidence after our forensic examination of the absentee ballots is completed and hold those persons responsible who engaged in this wrongful conduct."

The lawsuit is largely a repeat of one that Henry County Superior Court Judge Brian Amero dismissed in October after he ruled the plaintiffs, including longtime Georgia election systems critic Garland Favorito, hadn’t alleged a "particularized injury" and thus didn’t have standing to sue. Favorito and other plaintiffs are appealing that dismissal.

The new plaintiffs, who asked that the suit be assigned to Amero, say they have the standing to pursue claims that their state constitutional rights to equal protection and due process had been violated. Perdue claims his particularized injury was that he was a candidate for reelection in November but failed to achieve a majority, forcing him into a runoff with Democrat Jon Ossoff that Perdue lost. Lennon says she sought to cast an in-person early vote in October 2020 but was told someone had already sent in a mail ballot in her name.

Investigators with the Georgia Secretary of State’s office submitted a report to Amero just before he dismissed the case, saying they found no evidence of fraudulent ballots.

"Based upon the witness statements and examination of approximately 1,000 absentee ballots and ballot images, the Secretary’s investigators have not uncovered any absentee ballots that match the descriptions given ... or otherwise appear to be fraudulent or counterfeit," the legal brief said.

The new lawsuit recounts claims that the investigators debunked, including claims by Susan Voyles and three other auditors during a hand recount, that they saw "pristine" absentee ballots that appeared to have been marked by a computer and weren’t creased as they would have been if they had been put in envelopes. The investigators said they couldn’t find any such ballots.

The suit also renews debunked claims that election officials purposefully lied about stopping counting on election night, claiming that once observers left that election workers pulled out "suitcases" of ballots and counted the votes multiple times, effectively running up the score for Democrats.

Secretary of State investigators said they found no evidence this had happened, either, saying video showed the suitcases were normal ballot bins brought out when election workers were told to keep counting. Investigators said workers told them ballot scanners jammed frequently, requiring workers to make multiple attempts to scan ballots, and that scanner activity logs confirmed paper jams reported by workers and seen on video.

Investigators concluded, therefore, that there was no evidence to corroborate allegations in the lawsuit that election workers scanned and counted fraudulent ballots that had been hidden under tables at the arena. The brief notes that former U.S. Attorney BJay Pak reached the same conclusion based on statements made to the FBI and an independent review of the evidence.

Seth Bringman, a spokesperson for Abrams said that "while David Perdue conducts the conspiracy choir, Stacey will be focused on Georgians."