Braves fans love outfielder Adam Duvall for his skill as a power hitter. Braves fans love his son for his red carpet dance in front the team's charter bus. Fans turned out to send the team off to LA for the rest of the NLCS.

ATLANTA - The Atlanta Braves took a 2-0 lead in the National League Championship Series with its second consecutive walk-off win over the Los Angeles Dodgers.

With the World Series in sight, the work is far from over.

Fans turned out at Truist Park to send off Atlanta Braves players as they head to LA to face the Dodgers for Game 3 of the NLCS. First baseman Freddie Freeman received loud applause.

Fans showed up at Truist Park on Monday morning to watch players and their families board buses before they flew on to L.A. for the next leg of the series.

Fans brought signs and wore their Braves gear while they crowded around a red carpet arranged at the First Base Gate on Battery Avenue.

Fans cheered Outfielder Joc Pederson, whose playoff heroics have been key in the Braves' run. Fans watched as buses left for the airport while Braves players headed to LA.

The Braves had a police escort on the interstate as the caravan of busses left the park.

Right-hander Walker Buehler gets the start for the Dodgers in Game 3 against Braves righty Charlie Morton. 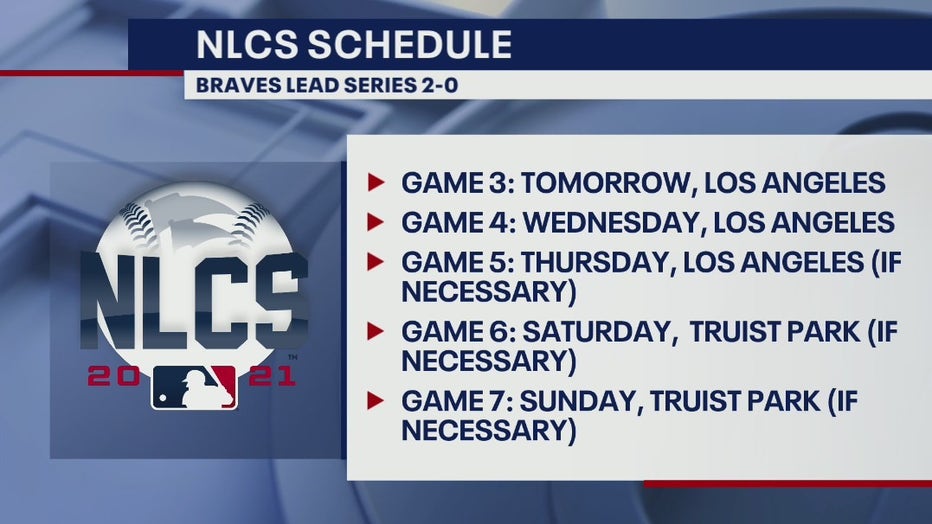