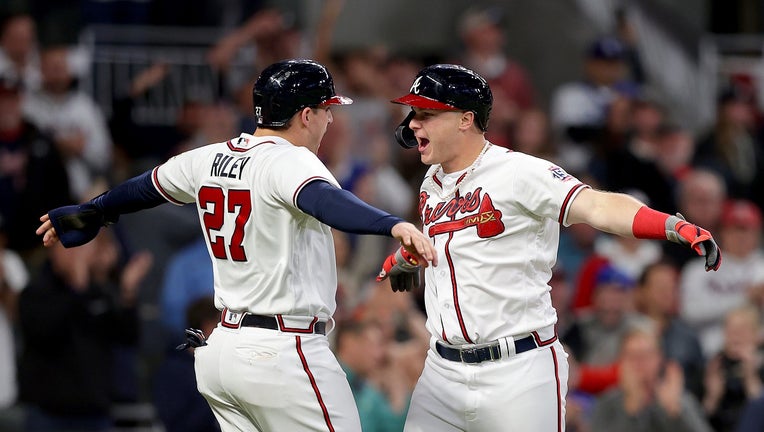 Joc Pederson #22 of the Atlanta Braves is congratulated by Austin Riley #27 after he a two run home run against the Los Angeles Dodgers in the fourth inning of Game Two of the National League Championship Series at Truist Park on October 17, 2021 in

ATLANTA - The Atlanta Braves for the second night in a row have walked off against the Dodgers, now leading the NL Championship Series 2-0. The Braves beat the Dodgers 5-4 on Sunday in Atlanta.

It is hard to believe this is just Game Two. The Braves and the Dodgers were battling Sunday like it was make-or-break time.

Atlanta twice rallied from two-run deficits before Rosario came up with his fourth hit of the game, a 105 mph scorcher up the middle on the first pitch after closer Kenley Jansen reliever. Seager tried for a backhand snag, and the ball went under his glove into the outfield.

The Dodgers got on the board first with two runs unanswered for by the Braves until the bottom of the fourth.

With Game One standout Riley on first, Pederson stepped up to the plate and slammed a 454-foot homer, the longest one this postseason. Braves tie it up going into the fifth.

It was scoreless through the seventh when Chris Taylor hit in two runs to put the Dodgers up 4-2. 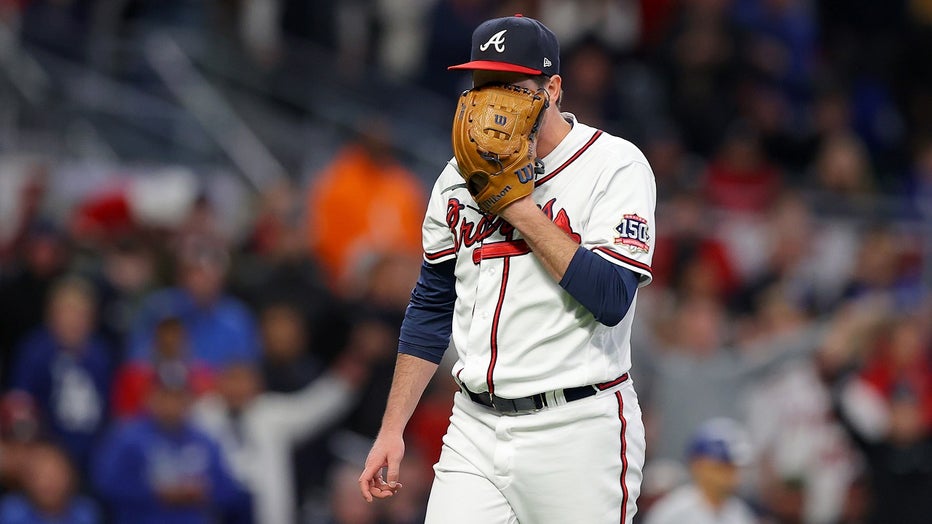 Luke Jackson #77 of the Atlanta Braves reacts after he gave up a double to Chris Taylor #3 of the Los Angeles Dodgers that scored two runs in the seventh inning of Game Two of the National League Championship Series at Truist Park on October 17, 2021

Third-base coach Ron Washington was taking risks in the eighth inning and it paid off big time. Ozzie Albies knocked a base hit into right field and Washington waves Eddie Rosario home from second base. It was nail-bitingly close, but he was safe.

In the bottom of the ninth, the Braves' last out, Rosario lined a two-out single off shortstop Corey Seager’s glove, giving Atlanta a 5-4 victory over the Los Angeles Dodgers on Sunday night.

Dansby Swanson raced around from second with the winning run, dropping his helmet as he crossed the plate, a virtual repeat of Game 1 when Austin Riley came through with a winning hit in the ninth for a 3-2 victory.

The Braves won 5-4 in their second walk-off in as many games in this series.

Atlanta was out Sunday night supporting Atlanta. Some of the Hawks, including Trae Young were at Truist Park to cheer on Braves.

The Hawks know what a big deal this is. They were in a similar situation just a few months back in the Eastern Conference Finals battling the Bucks. The Bucks would go on to win the whole thing.

The NLCS travels to the West Coast for a three-game swing through LA. Game Three is scheduled for Tuesday at 5 p.m.

The Braves need two more victories for their first World Series appearance since 1999, but they can’t celebrate just yet.

A year ago, they held leads of 2-0 and 3-1 over the Dodgers in the NLCS, only to lose the last three games. Los Angeles went on to beat Tampa Bay in the World Series, while the Braves stewed for another shot.

They are halfway there after rallying in the eighth off Julio Urías, who pitched three hitless innings to finish Game 7 against the Braves last October.