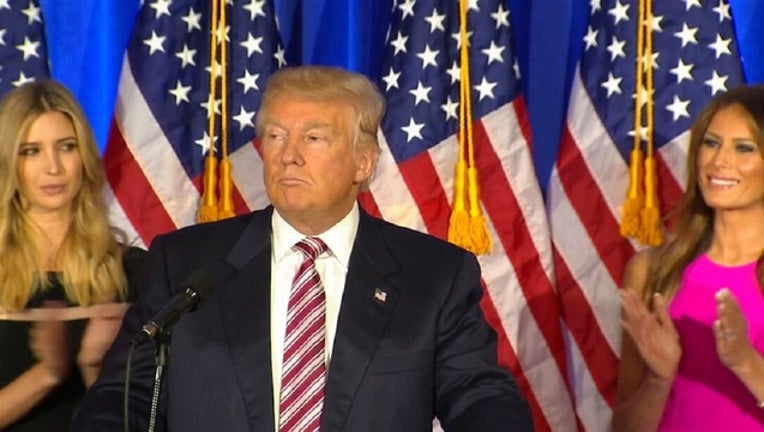 Trump was conciliatory at his victory rally, saying he understands "the responsibility" of leading the Republican Party. He also made a direct appeal to dejected Sanders supporters and other Democrats.

"This election isn't about Republican or Democrat, it's about who runs this country: the special interests or the people," he said.

Trump, after vanquishing his last opponents about a month ago, has continued to make controversial statements, frustrating party leaders.

The latest cause for GOP concern was his insistence that a judge handling a legal case involving the businessman was being unfair in his rulings. Trump has said U.S. District Judge Gonzalo Curiel can't be impartial because the jurist's parents were born in Mexico and Trump wants to build a wall along the border.

Illinois Sen. Mark Kirk, who is locked in a close re-election fight, became the first lawmaker to pull his endorsement of Trump. House Speaker Paul Ryan said the businessman's assertion was the "textbook definition of a racist comment" but he would continue to support Trump.

Trump released a statement saying he does "not feel one's heritage makes them incapable of being impartial." But he still questioned whether he was receiving fair treatment in the case involving the now-defunct Trump University.

If some Republicans harbored hopes of edging Trump off the Republican ticket at the party convention, that was dashed in Tuesday's uncontested GOP primaries. Trump ended the night with enough delegates who are required by party rules to vote for him, whatever their personal views.

His shaky support among Republicans stands in stark contrast to the Democratic leaders mobilizing behind Clinton.

There are 303 delegates at stake in five Republican primaries Tuesday.

Trump has 1,290 delegates. It takes 1,237 delegates to win the GOP nomination for president.