More than 100 demonstrators marched through the streets of Atlanta from Edgewood Avenue to Centennial Olympic Park in response to the guilty verdict in the Derek Chauvin trial.

ATLANTA - With signs and flags, a crowd of gathered in front of a mural dedicated to George Floyd on Edgewood Avenue Tuesday evening.

More than 100 demonstrators marched through the streets of Atlanta from Edgewood Avenue to Centennial Olympic Park.

The peaceful demonstration was part of several taking place across the nation in response to the verdict in the Derek Chauvin trial. Chauvin, a former Minneapolis police officer, was found guilty on all counts related to the death of George Floyd. The 12 jurors deliberated for around 10 hours before deciding to convict Chauvin of second-degree murder, third-degree murder and second-degree manslaughter

"Today makes a history, today we got a guilty verdict," said State Rep. Eric Thomas, who was with the demonstrators. "I stand here among young Black people, white poeople, Asian, Hispanic, that are looking at us right now and saying 'Black Lives Matter.'" 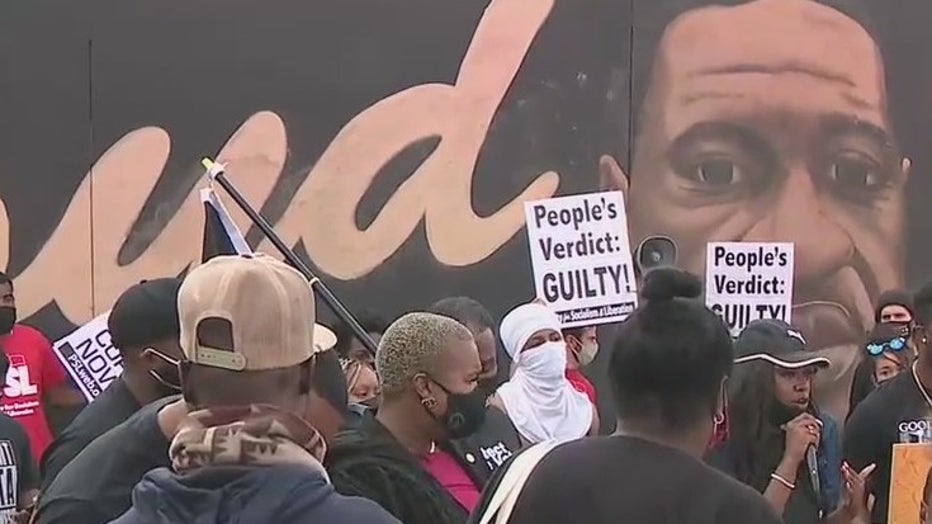 There were no threats of violence, demonstrators did not block any intersections. Some of the organizers made sure participants stayed close together in order to be out of the way of passing cars.

The peaceful gathering was more a celebration rather than a protests. Some called it a new beginning.

"Mr. Floyd you changed the world, and this is only the beginning. The only beginning you'll see, this is our new start," one of the demonstrators exclaimed.

People of all ages and races march down the street in unity just hours after the guilty verdict was announced. Tuesday's demonstrations were a stark contrast compared to events that unfolded over the summer.

"We've been protesting all summer long for George Floyd and to see a guilty verdict is beautiful," said Yonasa Lonewof, an activist. 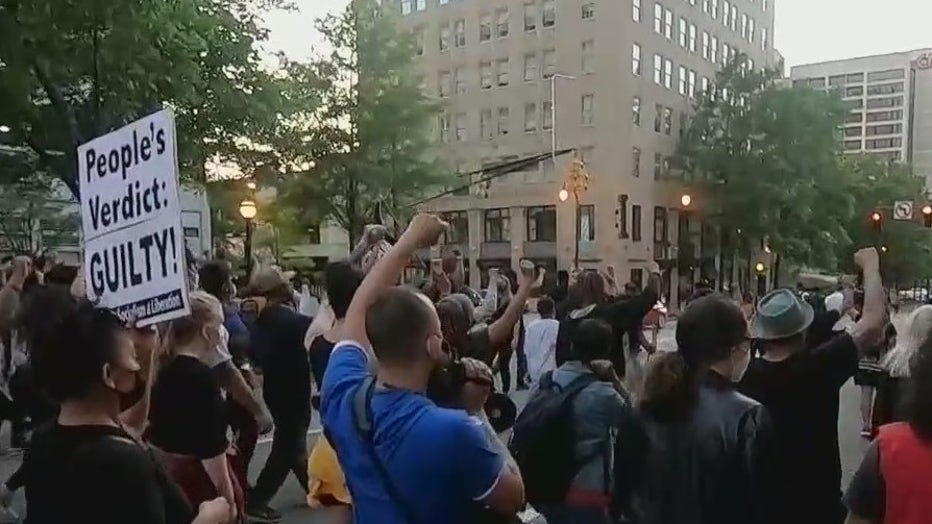 RELATED: How long is Derek Chauvin going to be in jail? Sentence next after conviction in George Floyd death

Chants, of "who streets, our streets, whose streets, out streets," could be heard throughout the march. But a couple of block from Centennial Olympic Park, the chanting stopped and fists were raised in the air.

Aaron Dixon was there with his 9-year-old daughter. Only 9-years-old and he says she already understands way too much about what is going on in the world.

"She wanted to be here to show her support for the guilty verdict," Dixon said.