Man accused of using bow and arrow to carjack woman

More details have emerged about the man accused of terrorizing drivers in metro Atlanta with a bow and arrow. Investigators say he used the unusual weapon to carjack a woman. The man made it all the way to Marietta where he crashed and was shot by an officer. This case is now in the hands of the GBI.

MARIETTA, Ga. - A suspect in an Atlanta carjacking is in custody after a standoff with police on a Marietta road.

The GBI has identified the man accused of pointing a bow and arrow at several people and crashing a carjacked vehicle in Cobb County as Trent Emry.

According to the Atlanta Police Department, officers were called to the 1400 block of West Peachtree Street after reports of a carjacking around 6:53 a.m.

At the scene, the female victim told officers she was in her vehicle when a suspect approached her armed with a bow and arrow. The woman said the suspect fired the arrow at her and took her 2014 Toyota Camry.

During their investigation, officers say they learned that the suspect may be connected to two other attempted carjackings shortly before - one on the 1600 block of Peachtree Road. 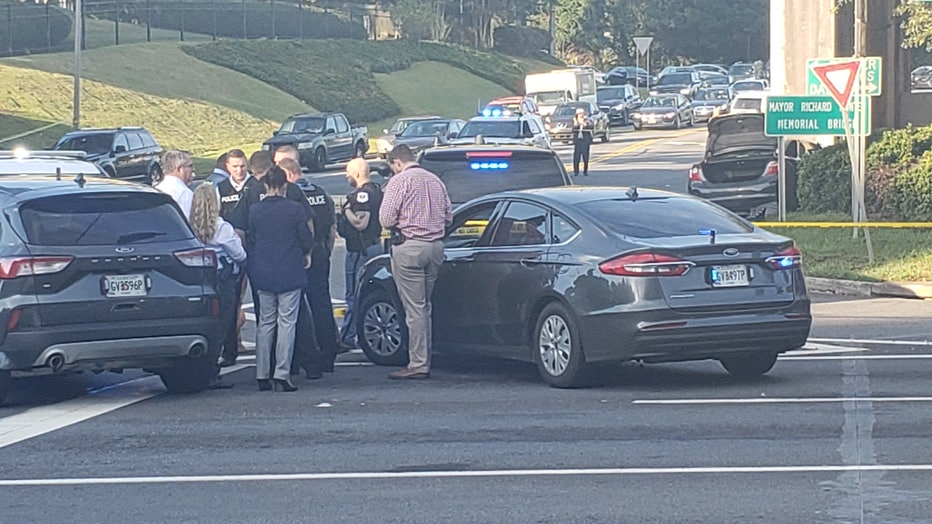 At the same time the Atlanta Police Department was investigating, Marietta police were called to a car crash at the intersection of South Marietta Parkway and Atlanta Street near South Loop.

When officers responded, they say the suspect, identified as 29-year-old Canton resident Trent Andrew Emory, pulled out a compound bow and arrow and aimed it at them.

"The method for the carjacking is definitely interesting," a woman named Tiffany said, as she walked by the original carjacking location.

At least one officer fired their gun at the suspect, hitting Emory and causing him to drop to the ground.

After a standoff, Cobb and Marietta police were able to get the suspect into custody. Medics transported the man to WellStar Kennestone Hospital where he is reportedly in stable condition.

Cobb County police have confirmed that the vehicle that crashed into the bridge was the same Toyota carjacked earlier and that Emory is the suspect in that investigation.

Police say the suspect was wanted in Atlanta for carjacking a victim while armed with a bow and arrow. He's now in custody after a car crash and standoff with police in Marietta.

While the standoff was going on, police shut down Powder Springs Street.

"We negotiated with him to get him to surrender and we took him into custody. Our concern was we didn’t want that violence to continue and it didn’t have to," Marietta Police Public Information Officer Chuck McPhilamy said.

FOX 5 did some digging and found Emry has criminal records out of Iowa and Illinois for several offenses ranging from DUI to domestic battery and harassment of a public officer.

The Georgia Bureau of Investigation has been called to investigate the officer-involved shooting aspect and a separate aggravated assault incident involving the case.

This is the 75th officer-involved shooting the GBI has been requested to investigate this year.