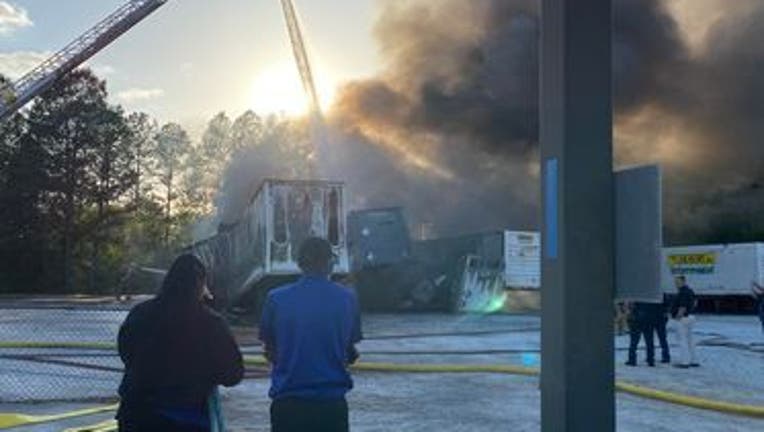 The NTSB released its preliminary report into the crash that happened on April 21. A twin-engine Cessna crashed into several semi trailers at remote part of the cereal plant just before 7 p.m. killing two people aboard. No one on the ground was injured.

A private pilot and student pilot were onboard the aircraft when witnesses said the plane made a "hard right" banking turn and "started to spiral downward." Surveillance video from the plant shows the plane "descending in a right spin at the time of the impact."

The small plane caught fire once it hit the ground destroying the cockpit, instrument panel, and the fuel lines and ignition wiring on both engines. The engines also showed damage from the actual impact. Officials were able to find the right horizontal stabilizer, elevator, vertical stabilizer, and rudder. They also were able to trace the flight control cables from the control surfaces to the respective bellcranks.

Both aboard had flown from Lubbock, Texas to DeKalb-Peachtree Airport the previous day. The day of the crash the plane had flown from to Gwinnett County Airport-Briscoe Field then Lumpkin County Wimpey’s Airport and then was headed to Covington Municipal Airport when it crashed, according to radar data.

The NTSB report states the student pilot was to being flight instruction the day of the crash.

The cause of the crash has not been determined. It could take up to two years for the investigation to be completed.

The plane was registered to Nixon Enterprises, Inc. out of New Mexico.