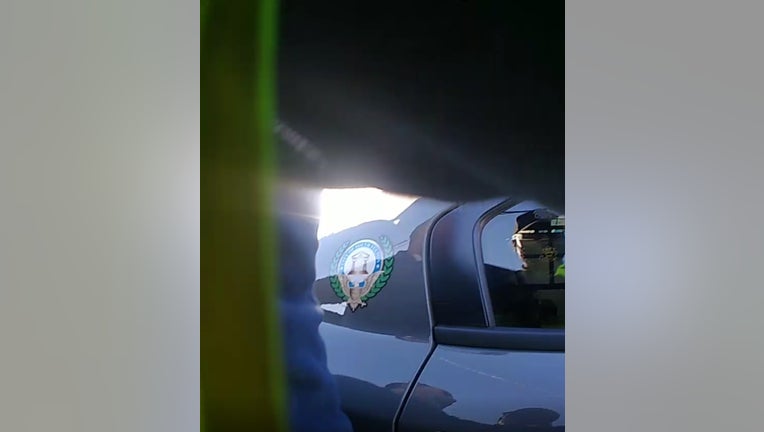 An image shows the bodycam worn by a South Fulton police officer being obstructed by a vest during a traffic accident on Jan. 29, 2021. (South Fulton Police Department)

SOUTH FULTON, Ga. - At least one policy within the South Fulton Police Department has been changed following allegations a community activist was illegally detained.

Marcus Coleman, a community activist, shot a video of a run-in he had with a police officer after asking why the department was not directing traffic during a traffic crash investigation on Friday.

"He attempted to slap the phone from my hand," said Coleman. "He attempts to tussle me. He attempts to wrestle me to the ground unsuccessfully. He then pulled his Taser and pointed it point-blank range at my chest."

The Georgia Bureau of Investigation is investigating after an incident involving a South Fulton police officer and community activist. The incident was caught on camera.

Coleman said the unidentified officer did not use a Taser on him. The officer placed him in the back of a patrol car, then released him after a supervising officer arrived on the scene.

When the department went to review the officer’s body camera, they found they couldn’t see much.

"For most of the footage, the officer's body cam is obscured by a safety vest he wore at the accident scene," a statement from a city spokesperson read. "Police Chief Keith Meadows has ordered that existing vests be modified so they don't block the cameras or that new vests be ordered."

The city has asked the Georgia Bureau of Investigation to look into the police officer’s actions. He was placed on administrative duty pending the outcome of that investigation.