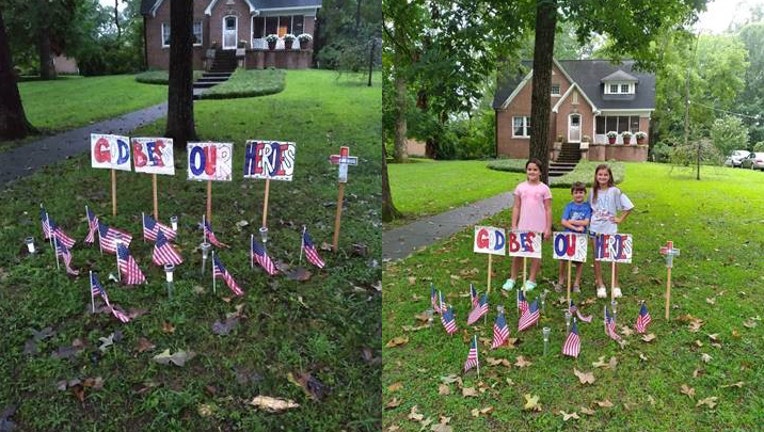 Cedartown children (from left) Anastyn Davis, Asher Bunn and Addison Bunn paid tribute to the 13 U.S. soldiers killed in the recent Kabul attack by planting 13 little flags and a sign in their yard. (Courtesy of Marylin Bunn) (FOX 5 Atlanta)

POLK COUNTY, Ga. - A Georgia family showed their support for U.S. military days after a deadly attack on U.S. troops in Kabul, Afghanistan.

The kids planted 13 little flags — one for each fallen soldier — and signs in their yard that together read, "GOD BLESS OUR HEROS."

The kids and their grandmother started the project on Sunday and finished on Monda, while the kids were out of school.

They planted solar lights to illuminated the mural at night.

Grandmother Marilyn Bunn said they felt, as a military family, they had to do something to commemorate the lives lost.

The Department of Defense identified the fallen as a Navy sailor, Army soldier and 11 Marines: