Atlanta police released body cam video of two officers trying to wake a driver who was passed out behind the wheel of a car in the road.

ATLANTA - Dramatic body camera footage shows Atlanta police officers trying to wake a driver who was passed out behind the wheel of a car in the road.

Officer Demetrius Brooks' body camera was rolling when he and his partner, Officer York, walked up to a car that was sitting on Howell Mill Road. 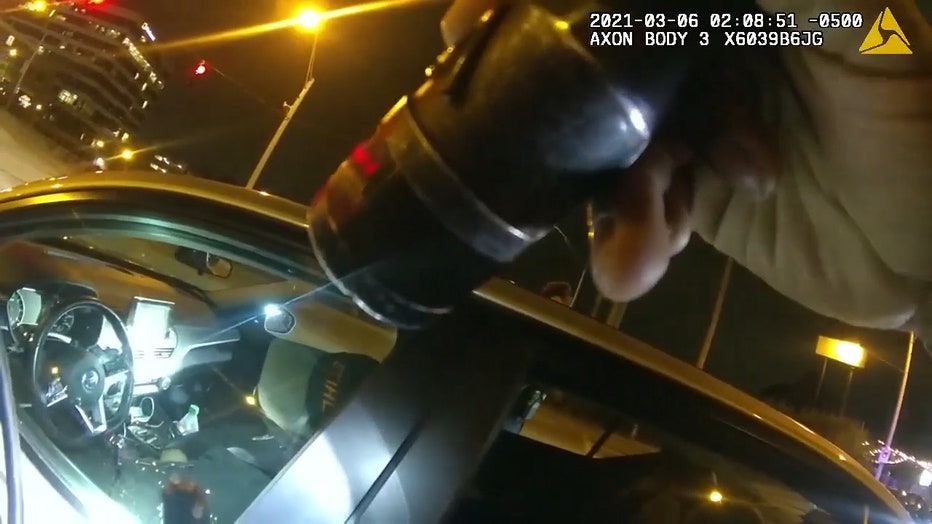 In the body camera footage, Officer Brooks can be seen knocking on the side of the car and the window in an attempt to wake the man up.

The man started to move a little bit, but then the car started moving forward.

"The vehicle started taking off. I guess the driver took his foot off of the brake," Brooks said.

The video shows Brooks running after the car as it goes on a sidewalk and hits the side of a bridge.

In the video, Brooks can be heard telling his partner to try to stop the car with the police car.

Brooks was able to catch up to the car. He then pulled out his baton and smashed the window.

Brooks said the man was checked out by paramedics and was arrested, and charged with several crimes, including driving under the influence.

Atlanta police said this video is a reminder of just how dangerous driving under the influence can be for everyone.

"The unfortunate could have happened, definitely. He could have hit a pedestrian, hit oncoming vehicles, somebody else could not have seen him, he could have ricocheted onto the expressway. It could have been bad," Brooks said. "Please do not get out here drinking and driving. We're sharing these roads. You want to make sure it's safe for us and safe for everybody."

Both of these officers received awards for their quick thinking and will be acknowledged during an upcoming event hosted by the Atlanta Police Foundation.