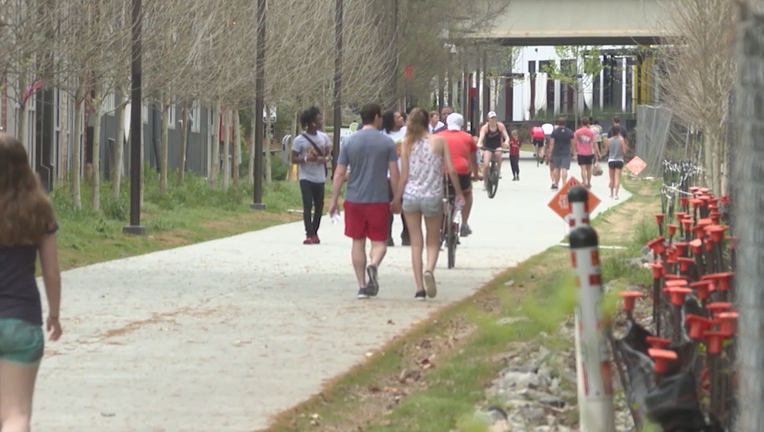 ATLANTA - While residents frequently use the Atlanta BeltLine, there's still some necessary work ahead to close the loop.

The City of Atlanta hopes the completion of the project will meet its approaching deadline thanks to new legislation.

The designation is a mechanism for raising funds to finish what officials thought the original Tax Allocation District would provide for in 2005.

The announcement on Monday said the Special Service District will provide approximately $100 million toward completing the 22-mile multi-use trail loop. It's a targeted tax district that means property owners will see an increase in their property taxes to fund the project. Officials said the SSD will appear on property tax bills in fall 2021.

"The Atlanta BeltLine has offered tremendous benefits for businesses and property owners along its completed trails," Mayor Keisha Lance Bottoms said. "The SSD will help give communities throughout the city the opportunity to enjoy the benefits associated [with] the closing of the loop."

A handful of factors slowed the development of the BeltLine, which was conceived more than 20 years ago. Officials said in February that approximately $300 million in funding was necessary to complete the project by the target year of 2030. Some estimates for the required dollars are near $350,000.

Officials said the SSD projects to provide an additional $100 million in philanthropic contributions and an anticipated $50 million in grants and other sources. More funding stems from other initiatives, as well, including $100 million from the BeltLine TAD.

City officials think the funding will ultimately be a positive economic impact on communities tied to the trail. Officials estimated a $10-billion economic impact and near 50,000 permanent jobs in the city as a result of the trial's completion.

Officials said the city sought feedback from residents and made some adjustments to the original form of the legislation:

The city now begins work issuing bonds for ABI to start incorporating funds into the budget.

City officials said the ABI economic development team will build a plan to address the needs of BeltLine businesses, while a separate team will outline the implementation of some $45 million in funds for affordable housing. Officials made promises to acquire minority-owned contractors for the project.