ATLANTA - The city of Atlanta is taking further steps to prevent the spread of the coronavirus.

Mayor Keisha Lance Bottoms announced Thursday that she has signed an executive order limiting restaurants to take out service, closing bars, gyms, and other areas of gathering.

"I have signed an Executive Order, effective at midnight, limiting restaurants to take out service, closing bars, gyms, etc. The fate of cities across the globe will be upon soon if we do not follow recommendations on ways to slow the spread of the Coronavirus," the mayor tweeted.

The executive order goes into effect at midnight. 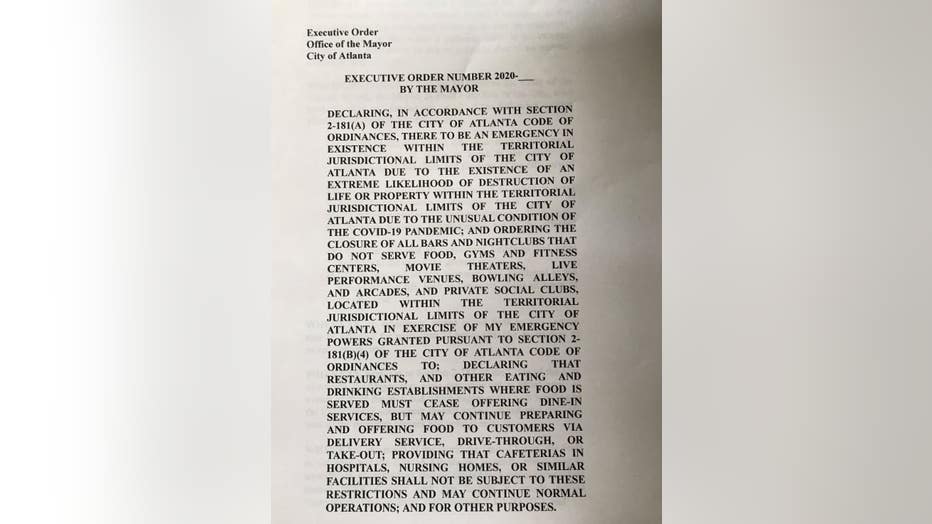 As of Wednesday, three additional people in Georgia had died due to the virus, bringing the total number of deaths to three. Health officials also confirmed there were 197 cases in the state since testing began.

Atlanta's mayor issued an executive order limiting restaurants, closes bars and gyms, but it is adversely impacting some businesses.

On Wednesdau it was learned that Georgia's lieutenant governor and several members of the Georgia General Assembly are self-quarantining after a member of the senate tested positive for COVID-19.

Multiple cities in Georgia have initiated their own responses to the spread of the virus. In Atlanta, Mayor Keisha Lance Bottoms declared a state of emergency within the city limits, banning large public gatherings of more than 50 people until March 31.

Good Word Brewing and Public House in Duluth is currently serving up two types of hot soup daily, offering them up for free to those in need.&nbsp;

The City of South Fulton has implemented a curfew between 9 p.m. and 7 a.m. for all residents, excluding people going to and from work, emergency personelle, essential city personnel, and people making deliveries.

Lawrnenceville, which has spent nearly 20 years carefully cultivating an array of restaurants along the Historic Downtown Square, is allowing restaurants with a liquor license to sell alcohol with their carry-out meals. Bottled beer and wine.

The city of Lawrenceville teamed to help its downtown restuarants