Following the deadly shooting at a Midtown apartment Wednesday, Mayor Keisha Lance Bottoms issued a reminder to the public to dial 911 instead of recording crimes to post to social media.

ATLANTA - Police responded to a frantic situation in Midtown Atlanta early Wednesday morning when a gunman forced parts of West Peachtree Street to close down.

Officers typically get the information they need from dispatchers when responding to an active shooter situation, but Atlanta's mayor and police chief said the city's 911 center received little information on the incident Wednesday morning compared to what they discovered on social media. Too many people watched and recorded video of the incident on their phones and not enough people called 911, they said.

Mayor Keisha Lance Bottoms and police chief Rodney Bryant said during a press conference they were frustrated that bystanders shot cell phone video of the shooting rather than relaying information to law enforcement.

Atlanta Mayor Keisha Lance Bottoms said citizens recorded video of a shooting incident instead of calling 911. Police responded to the scene based on information from social media. Police are asking anyone with video evidence to call the Atlanta Police Department.

"Just a reminder to the public to please call 911," Bottoms said. "We did start receiving phone calls but social media has received more information, quite frankly, than we received at our 911 center. For just to be able to appropriately respond and assess, we ask you to put down your camera … call 911, and then allow us to do what we do."

According to officials, the shooting happened close to the 1100 block of West Peachtree Street around 4 a.m.

As they were receiving was receiving information, Bryant said dispatchers could hear gunfire in the building. 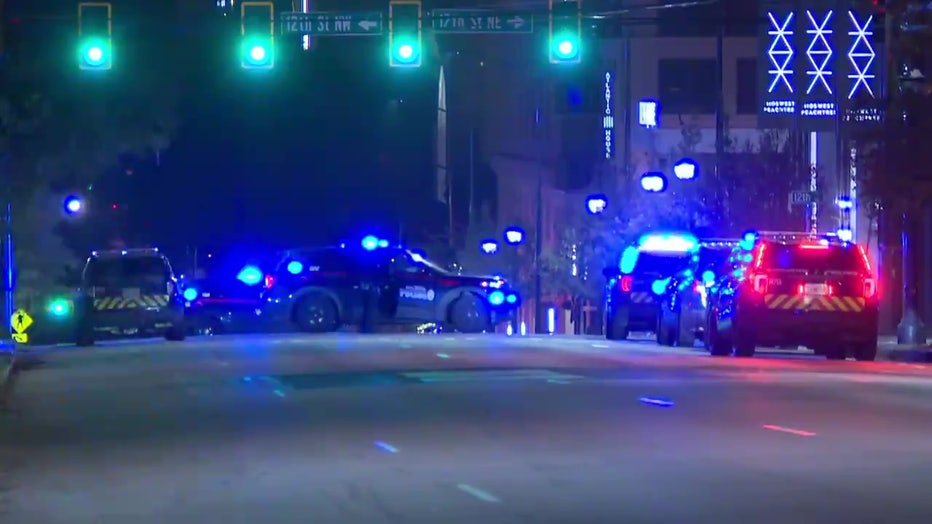 Police set up a large perimeter in the Atlanta neighborhood and closed multiple streets while they searched for the suspect.

After hours on the scene, police contained the shooter inside a high rise on West Peachtree Street. The shooter and a female victim died, police said, and the Georgia Bureau of Investigation launched a probe into the shooting.

Atlanta police chief and mayor hold a press conference following an active shooter situation in Midtown. Police say a woman and the assailant were killed.

Bryant said some of those videos could help the investigation into the incident. He asked anyone with additional information to contact the Atlanta Police Department or Crime Stoppers.