Mayor Kiesha Lance Bottoms said she pressed Gov. Kemp on the issue, but he disagreed

ATLANTA - Atlanta Mayor Keisha Lance Bottoms signed an executive order Wednesday evening, mandating the use of masks throughout the city.

The order requires anyone within city limits and Hartsfield-Jackson International Airport, to wear a mask or a cloth face covering over their nose and mouth, except those with a medical condition that prevents them from wearing a face mask or are under the age of 10.

“We will continue to take active measures to help slow the spread of COVID-19 infections in Atlanta. Public health experts overwhelmingly agree that wearing a face covering helps slow the spread of this sometimes deadly virus," Mayor Bottoms said in a statement.

The order also restricts gatherings of more than 10 people on City of Atlanta property but does not impede the operation of any businesses, establishments, corporations, and organizations as provided in the Governor’s June Executive Order, according to the mayor's office.

Speaking on MSNBC Wednesday morning, Bottoms said that she had specifically pressed Gov. Brian Kemp on allowing Atlanta to mandate masks in public. The governor has promoted wearing masks, but said he will not mandate it.

“Atlanta is going to do it today because the fact of the matter is that COVID-19 is wreaking havoc on our city, specifically black and brown communities with higher death rates and we will never be able to reopen our schools and our economy if we don’t take some responsibility for what we can do as leaders to make sure people aren't exposed to this virus,” Bottoms said.

Bottoms' announcement comes days after she said on Twitter that she had tested positive for COVID-19, saying that the virus "has literally hit home."

She told MSNBC that she decided her family members should get tested again because her husband “literally has been sleeping since Thursday.” She said the only other symptoms she and her husband have been experienced are those similar to allergies they have. 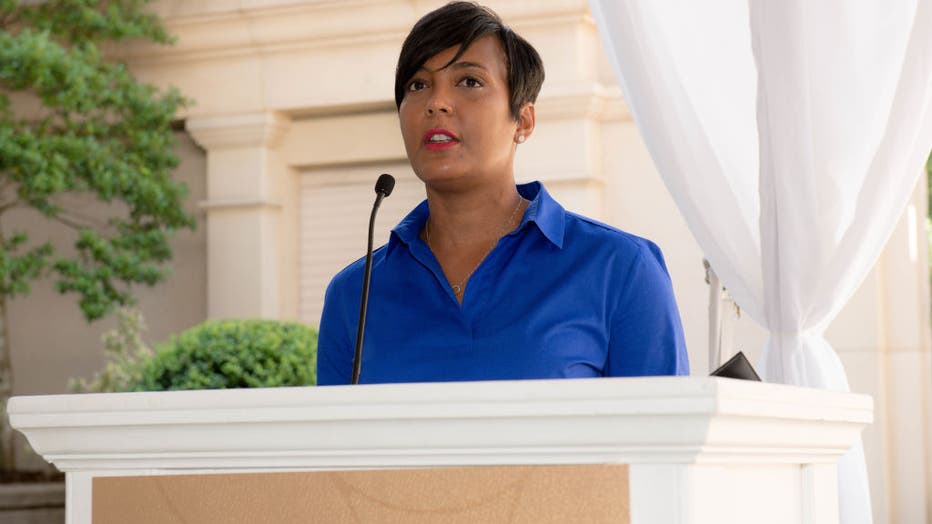 Mayor Keisha Lance Bottoms says she will sign an order mandating face masks in the city. (Photo by Marcus Ingram/Getty Images for City Of Hope)

Multiple Georgia cities have announced mandatory face masks in a short period as cases of the virus continue to increase. In June, the mayor of Savannah issued an emergency order that made wearing masks in public mandatory.

On Tuesday, Athens-Clarke County commissioners voted to pass a measure to mandate masks of all residents. The City of East Point also passed a bill, which would become effective Thursday at midnight. The City of Doraville announced that it plans to introduce an ordinance requiring the use of face masks in public spaces at its next meeting on Monday, July 13.

Instead of new rules, Kemp on Tuesday urged local officials to do more to enforce current restrictions on how businesses, citizens, and others are supposed to operate.

“I know some want us to roll back the reopening and others want us to keep moving forward,” Kemp said. “But here’s the question: are folks following the current executive order? If not, let’s get to work.”

As of Tuesday afternoon, more than 100,000 Georgians have been confirmed to have coronavirus infections since the pandemic started, the Georgia Department of Public Health said.