ATLANTA - All seats at State Farm Arena between the Atlanta Hawks and Miami Heat are sold out for a second straight game, the team announced.

According to the Hawks, a limited number of standing-room only tickets remain for Game 4.

The Hawks lost Game 1 of the series after winning the play-in tournament to earn the eighth spot in the Eastern Conference. Miami then defeated the Hawks for a second time in the series on Tuesday to take a 2-0 lead in the best-of-7 series.

Trae Young hit a floater in the lane with 4.4 seconds left and the Hawks overcame a 16-point deficit in the second half to beat top-seeded Miami 111-110 on Friday night, cutting the Heat’s series lead to 2-1.

P.J. Tucker led a 21-0 run in the third quarter that pushed the Heat to an 84-68 lead and seemingly on cruise control to a 3-0 lead. But Young and the Hawks would not let them get away.

A limited edition red t-shirt featuring the words "Believe Atlanta" will be placed on every seat inside the arena prior to the start of the game.

Delay due to suspicious package

The tipoff for Game 3 was delayed after the suspicious package was found outside Gate 2 of the arena, near a stairwell that provides access to a MARTA subway station. 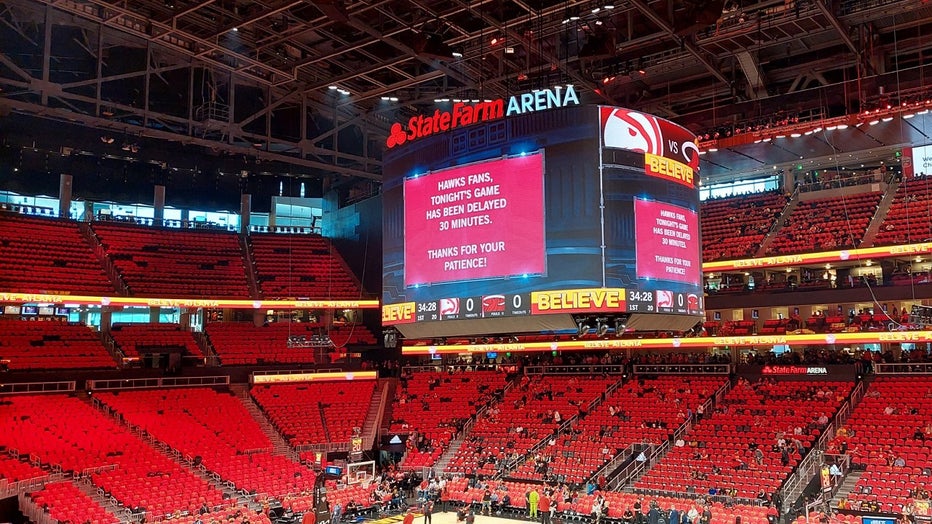 State Farm arena is nearly empty minutes before Game 3 between the Hawks and the Heat due to a report of a suspicious package on April 22, 2022. (Cody Chaffins /FOX 5)

Three gates were closed, preventing fans from entering while police, K-9 units and arena security cleared the area and investigated the package.

A bomb squad safely removed the package after it was found not to be explosive, clearing the way for the entrances to be opened.

The Hawks have built quite a home-court advantage since mid-January, winning 21 of their last 24 games at State Farm Arena. They’ll go for their seventh straight home win in Game 4.