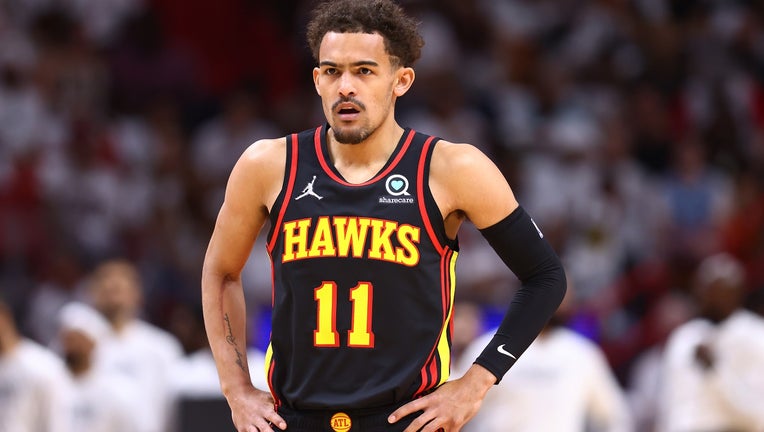 Trae Young #11 of the Atlanta Hawks looks on against the Miami Heat during the first half in Game One of the Eastern Conference First Round at FTX Arena on April 17, 2022 in Miami, Florida. NOTE TO USER: User expressly acknowledges and agrees that, b

In simplest terms, that’s how Game 1 went for Miami and Atlanta.

Robinson came off the bench to set a franchise playoff record with eight 3-pointers, and the top-seeded Heat forced Young into matching the worst-shooting game of his career on the way to a 115-91 win over the eighth-seeded Hawks in the opener of an Eastern Conference first-round series Sunday.

"It’s always nice to throw the first punch," Robinson said. "But in the grand scheme of things, it’s just winning one game."

But this wasn’t about offense for Miami. It was about defense, so much so that even Heat coach Erik Spoelstra — a former point guard himself — spent some possessions in a defensive stance, clapping his hands and imploring his team to dig a little bit deeper on that end of the floor.

"You have to be on edge," Spoelstra said.

"You’ve got to give them credit," Young said. "They came out aggressive."

Robinson broke the record of seven 3s that he previously shared with Damon Jones and Mike Miller.

He sizzled. The Hawks fizzled.

Young — who saw everything from traps to full-court pressure — was 0 for 7 from 3-point range and finished with just eight points, a season-low. Bogdan Bogdanovic missed all eight of his shots, and the Hawks never led outside of a brief edge in the opening minutes.

Butler revealed the Heat game plan when it comes to defending Young: "Just make it physical on him, challenge every shot, keep him off the free throw line and make him pass," he said.

Atlanta went 3-0 in Game 1s last year, all three of those wins on the road, coming by two, four and three points, respectively.

This was one-sided by halftime. The Heat set the tone by forcing Atlanta into a 1-for-11 start from the field — free throws were the only thing keeping the game close for much of the first half — and Miami took a 59-40 lead into the break.

Gallinari made a 3-pointer to open the second half, getting the Hawks within 16. And that was as close as the Hawks got. Miami controlled the rest of the third, turning things into a complete runaway.

It was 86-60 after three, the Hawks managing only one more point through 36 minutes than Miami had through 24, and the outcome was decided. A four-point play from Robinson with 8:54 left was probably the official end to all Atlanta hope, as Miami fans waved their white giveaway rally flags in earnest after the Heat won a home playoff game — excluding the bubble run in 2020, which obviously wasn’t at home — for the first time since 2016.

"I came here for this." Tucker said.

Hawks: The 19-point halftime deficit was Atlanta’s second-largest of the season. Atlanta trailed Chicago by 21 at the break on Dec. 29. ... Atlanta was playing less than 36 hours after arriving in Miami following its play-in victory at Cleveland on Friday. The Hawks got settled in Miami around 3 a.m. Saturday, and Sunday had a 1 p.m. start.

Heat: Butler — one of the best free-throw shooters in the NBA — started 0 for 3 from the line, the first time he’s done that in his first three Heat seasons. ... Tucker, Lowry and Max Strus all got their first Miami playoff starts. There have now been 69 players all-time to start a playoff game for the Heat.

Robinson’s eight 3s were the second-most in NBA playoff history by a reserve. Jason Terry had nine for Dallas in a 2011 win over the Los Angeles Lakers. J.R. Smith had eight for Cleveland in a 2015 game, also against Atlanta.

Collins (foot, finger injuries) played for the first time in 19 games. He was 4 for 6 in 21 minutes, with the Hawks needing extra depth inside with Clint Capela out with a right knee injury.

Game 2 is Tuesday in Miami.