Search for driver who ran down man on Moreland Avenue

A man was struck and runover while walking along Moreland Avenue at the start of November. It will take a long time for him to fully recover, but he hopes the person responsible will be caught before that happens.

ATLANTA - The victim of a hit and run is sharing the moments leading up to the near-deadly collision.

It happened earlier this month in southeast Atlanta, and he said the driver is still behind the wheel.

"I try not to let it get to me," Michael Meyer explained. "It is kind of rough at times. I do have my moments."

He is now out of the hospital after undergoing major surgeries to repair his shattered ankle and a broken arm.

"They did a really good job actually putting the titanium rod, fusing it with the bone. I'm currently working on physical therapy for that. I'm still not able to put any downward pressure on my ankle. I'm still about three to four weeks away from that," he told Reporter Brian Hill.

He said he doesn't remember much about the night of the hit and run.

Meyer said he and a friend had just left a concert nearby and were heading to meet another friend.

"Walking in the process, we ended up on Moreland going south. I've been told that I tried to cross the street and that's when I got hit," he detailed.

That hit happened near Memorial Drive, not too far from the ramp onto Interstate 20 overnight on November 1. 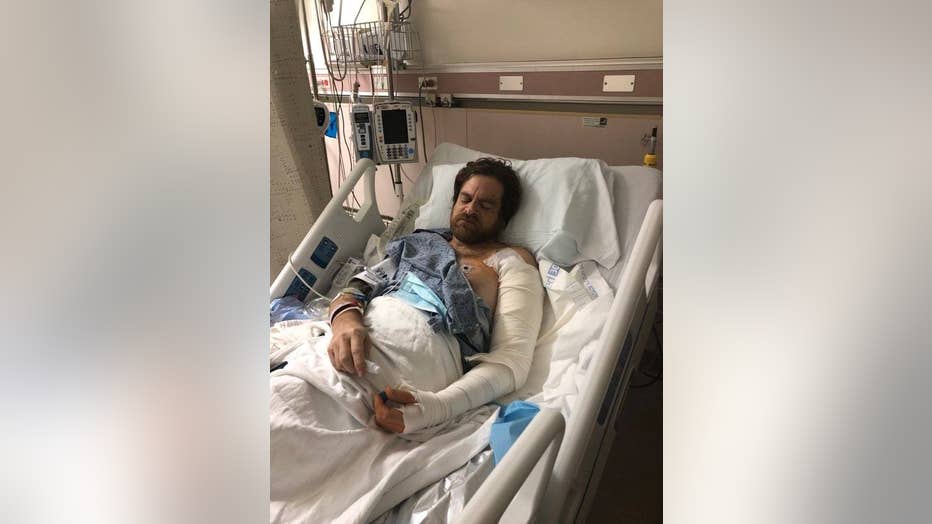 Meyer said the next thing he remembers was waking up in the hospital.

The California native had only lived in Atlanta for about three weeks prior to this and said it's affected his ability to work as he continues his recovery.

"there have been quite a few financial things that I was not prepared for in the wake of this and it's pretty much drained me."

Meyer said his friend and another driver immediately called 911 after the hit and run.

He said police are still trying to find the driver.

"I've been told no investigators has been assigned to the project yet. There was basically just, apparently, more priority cases in front of me," Meyers told me.

FOX 5 reached out to Atlanta police to see if there's any information about a possible suspect vehicle or surveillance video but haven't heard back.

Meyer's friend is now raising money to help him with mounting medical bills.