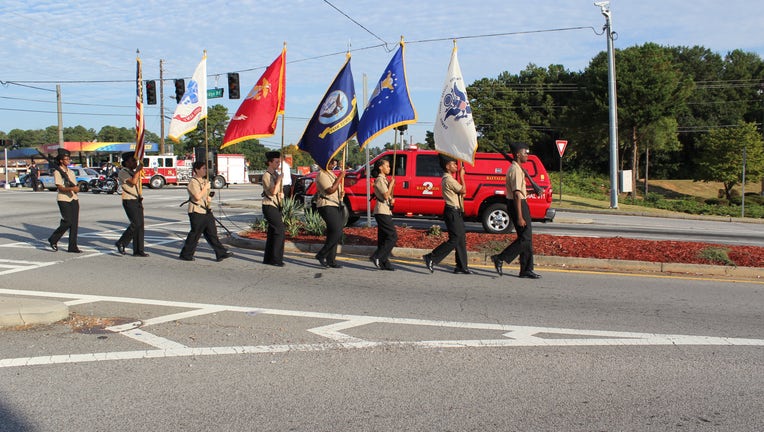 If you live in metro Atlanta, chances are a city near you is planning a tribute on the 20th anniversary of the Sept. 11 attacks on the U.S.

Some tributes began on Friday.

Here's a list of events happening on Saturday, Sept. 11, in metro Atlanta:

Gwinnett County Fire and Emergency Services will mark the tragic events of the 9/11 attacks with a ceremony at 8:30 a.m. at the Fallen Heros Memorial outside of the Gwinnett Justice and Administration Center.

Public safety figures and county commissioners will provide remarks and recall where they were on Sept. 11, 2021.

DeKalb County organized meal kits, which they began passing out on Friday. County employees and partners will distribute 4,100 boxes of produce and chicken at 10 a.m. Saturday at several locations:

The city will host a race starting at Friendship Plaza.

The 9/11 Heroes Run 5k allows families to pay tribute to first responders who sacrificed themselves to save others. People are invited to cheer along to race route. The race begins at STATS Brewpub on Marietta Street. The route spans as far north as Tech Parkway past Bobby Dodd Stadium and passes the Georgia Aquarium on Luckie Street.

The event is set for 8 p.m. at Morgan Hall at the Bailey Performance Center

The Atlanta Braves will hold a special pregame event, in which fans can hear stories from survivors, and an on-field ceremony, which includes a tribute video and moment of silence. Two local firefighters will perform the National Anthem while a giant American flag is unfurled across the outfield and carried by approximately 100 first responders, followed by a fly-over performed by four F16s from Shaw Airforce Base.

John Morabito, a FDNY Ladder 10 firefighter who was a part of the initial rescue team that arrived on the scene, will throw out the first pitch.

Saturday's event at Town Center Park will begin at 6 p.m. It will feature keynote speeches from people affected by the Sept. 11 attacks as well as first responders represented by Gwinnett Fire, Suwanee Police, and a flag and wreath-laying ceremony.

Attendees should bring their own chairs, if needed, for the brief ceremony.

The City of Stockbridge will host its annual Sept. 11 Remembrance Ceremony on Saturday at 8 am at Stockbridge City Hall located at 4640 North Henry Boulevard. Stockbridge High School Navy JROTC and the Henry County Police Department to participate in the ceremony.

The city will close the intersection of North Henry Boulevard and East Atlanta Road periodically from 8:30 a.m. to 11 a.m. to coincide with the timing of the attacks 20 years ago.

Senators Reverend Raphael Warnock and Jon Ossoff are holding an event to remember the tragedies of 9/11 and honor service members and first responders at 8:30 a.m. at South Fulton Fire and Rescue Station 2 at 4121 Cascade Road.