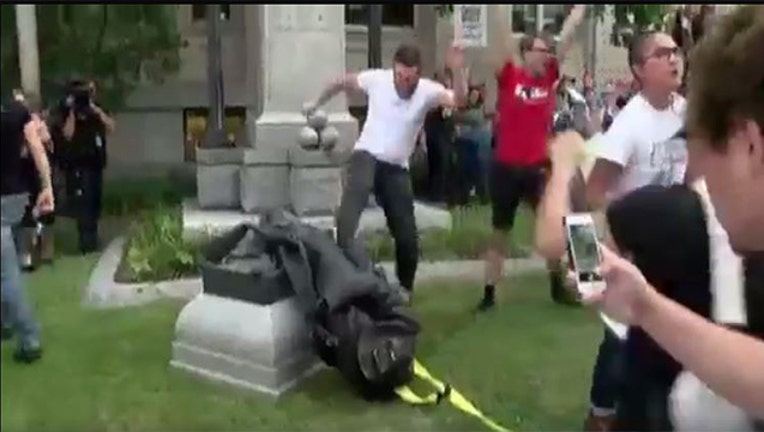 DURHAM, N.C. (AP) - Three more protesters have been arrested in connection with the toppling of a Confederate statue.

The Durham County Sheriff's Office issued a news release Wednesday afternoon that it had arrested Peter Gull Gilbert, Dante Strobino and Ngoc Loan Tran in connection to the incident.

Takiyah Thompson was arrested at a news conference on Tuesday where she identified herself as the woman who climbed the statue and attached the rope used to pull it down.

Each faces two felony charges related to inciting and participating in a riot, along with two misdemeanors.

The statue in Durham came down Monday night after Thompson attached the rope and demonstrators on the ground then pulled the bronze Confederate soldier from its pedestal. The toppling followed deadly violence over the weekend during a white nationalist rally in Charlottesville, Virginia.

A group that organized the protest didn't immediately respond to messages Wednesday seeking comment on the arrests.

Authorities are also saying two Confederate statues in the coastal North Carolina city of Wilmington have been vandalized. No arrests have been made, but the vandalism is under investigation.