OCONEE COUNTY, Ga. - The FBI is offering a $5,000 reward in the search of a suspect in the murder of a Georgia gas station clerk during an attempted robbery.

Officials say the shooting happened around 1:40 a.m. on Friday, March 19 at the RaceTrac on the 7,900 block of Macon Highway. Investigators said it is the first homicide in Oconee County in two years.

According to investigators, the masked gunman walked into the store, pointed his handgun at 23-year-old Elijah Wood, and pulled the trigger.

A customer found Wood laying on the floor and called 911. Deputies arrived at the scene, starting CPR and other life-saving measures, but were unsuccessful. Medics shortly after and pronounced him dead at the scene.

Loved ones told FOX 5 the Watkinsville resident was just a week away from celebrating his 24th birthday.

"They were devastated. We went to their house and woke them up in the dead of the night to let them know that their loved one had been gunned down in a convenience store they were working at," Oconee County Sheriff James Hale said at a press conference. 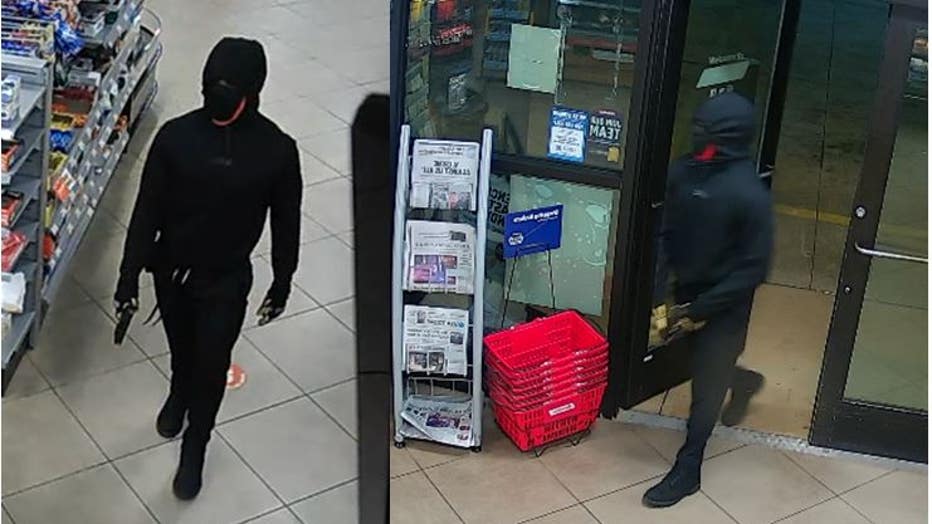 The FBI is asking for help identifying this suspect in a deadly Oconee County gas station shooting. (FBI Atlanta)

Wood's family has set up a GoFundMe to help cover his funeral expenses.

Only Wood and the gunman were in the store at the time of the shooting, deputies said.

Investigators have released surveillance photos and video of the suspect in the attempted armed robbery hoping that someone can help them identify him,

The suspect was wearing dark-colored clothing, a face mask, and gloves. Police say he should not be approached and should be considered armed and dangerous.

Along with the FBI's reward, RaceTrac is also offering $5,000 for information that leads to the arrest of a suspect.