ATLANTA - The Lithia Springs Lions qualified for the GHSA football playoffs for the first time in nearly 40 years, in the most difficult of ways: by sweeping two 10-minute mini play-in games at Lakewood Stadium Monday night.

"To see those kids, you know being down for the past three or four years, those kids deserve an opportunity like this," said Lithia Springs first-year head coach Corey Jarvis. "It's a special moment for them and I'm glad I'm here share it with them, to be honest, you know."

The Lions captured the fourth seed in Region 6-AAAAA and will now face Clarke Central in Athens on Friday in the first round of the playoffs. If Lithia Springs can find a way to upset the Gladiators at Billy Henderson Stadium, they will have a chance to finish with a .500 or better record for the first time in a decade.

The battle for the postseason at Lakewood Stadium

For Jarvis, it's a chance at redemption, and an opportunity to reclaim the reputation he once held as one of the top head coaches in the metro area. Jarvis compiled impressive win-loss records at MLK and Mays before being fired by the Atlanta School Board in 2015. An investigation determined there was missing money belonging to the Mays football team, and that Jarvis had engaged in confrontations with a parent and a school visitor. Jarvis resurfaced as the head coach in Dooly County in 2018 before taking the Lithia Springs job this season.

The Lions entered Monday night tied with Banneker and Maynard Jackson with identical 3-4 region records. Banneker won the coin toss and got to watch as the Jaguars and Lions faced off in the first of two mini play-in games. Lithia Springs won the first matchup 3-0 on a field goal by kicker Oswaldo Pelayo on the final play of the game. 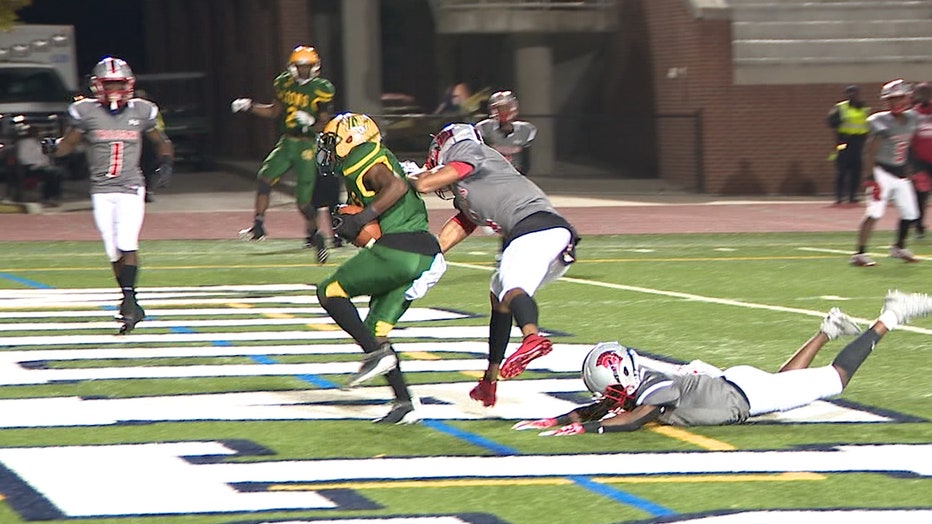 That set up a winner-take-all game with Banneker. The Lions scored on their first possession when quarterback Kevin Mfortow connected with Malik Thompson, and after an extra point, it was 7-0 Lithia Springs. The Trojans responded with a touchdown of their own late in the second half when Kobe Harris slid in for a score. Banneker elected to try a 2-point conversion for the win, but Nick Williams' pass to Octavious Howard fell just short and Lithia Springs held on for the 7-6 win.